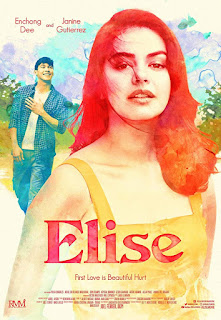 Elise, directed by Joel Ferrer, reveled in its simplicity and innocence. It was predictable and carefree. It did not aspire to become anything but a Filipino coming-of-age romantic film set in a small town in Bulacan, where teachers were still feared, where students walked to school, and where, on the way home, one could still appreciate the greenery. The houses were old but homey, draped with see-through curtains similar to what we used to (and still) have at home. The scenes were tinted with a warm glow; it must have been stifling in those houses, what with the lack of air-conditioning, but nobody perspired.

But there was comfort in knowing how things would end as soon as the film had begun. There was Bert (Enchong Dee), shy and reserved and whose tongue failed him when he wanted to say something, falling in love with Elise (Janine Gutierrez), a strong-willed girl who promised him, “Ako ang bahala sa iyo,” until she left for Manila. They lost touch, fell in love with other people, and reconnected in college. They ended up together and decided to elope on a rainy night. They built a successful ice cream business (Josie’s, it was called), and then there was the ending, which I shall not mention. You may think the film ended tragically, but, as with most things, it is a matter of perspective. I think it was a great ending, nevertheless: a reminder that we go can go through life with joy despite the pain and suffering we’ve been through.

My friend Mervyn, who suggested that I watch it, told me the conversations sounded “natural.” They talked like real people one would overhear in daily life. I liked it very much.
film