Showing posts from April, 2012
Show all

One of my favorite pastimes, aside from sleeping, is taking solitary walks. It clears my mind and helps me meditate on God's timeless truths. I'm grateful because I have a lovely view surrounding me, mostly old, wooden houses built in the 50's, and which some members of the staff now occupy.
Post a Comment
Location: Sayre Hwy, Malaybalay City, Philippines
Keep Reading

The actual hospital rounds begin on Thursday—a good thing, I guess, because for the past two days, Abby and I have had ample time to roam around Malaybalay, catch up on our reading (medicine-related or otherwise), finalize domestic arrangements (Ate Dina and Inday agreed to cook for us), and have casual chats with some of the doctors and staff at Bethel Baptist Hospital, all of whom were so warm and accommodating that we were already invited to our first dinner last night. The dinner was at Pastor Philip and Dr. Jena's house, just right across the guest house where we're staying.   During our orientation at 3 pm this afternoon, Doctors Troy, Susan, Leslie, and Hope asked if, by any chance, one of us would be having our birthday during our stay here. I said I had mine last Sunday. They erupted in excitement. "We'll celebrate it then! Do you like chocolate mousse?" "I absolutely love chocolate," I said.
Post a Comment
Location: Sayre Hwy, Malaybalay City, Philippines
Keep Reading

It's my second day in Malaybalay, Bukidnon, a small and quiet city where I'll be spending the next four weeks for my off-campus elective. I booked a morning flight to Cagayan de Oro City, and I was already at the airport two hours before the flight (my mother's stern advice)¸ which was a good thing because I was able to have breakfast—the hot chocolate, though, did something to my bowels. From there, the plan was that I would take a two-hour bus ride to Bukidnon. CDO didn't look like it suffered a major disaster a couple of months back. Everything seemed back to normal. No more rotting bodies or jam-packed funeral parlors. I doubt, though, that the people there have actually, truly moved on.
Post a Comment
Keep Reading

The prospect of being somewhere cooler

As the emotionless character, Mersault, in Albert Camus' The Stranger was describing the unrelenting heat in Algiers, I couldn't help but find similarities in the current climate situation in Manila: "The sky was already a blaze of light, and the air stoking up rapidly. I felt the first waves of heat lapping my back, and my dark suit made things worse." "Now in the full glare of the morning sun, with everything shimmering in the heat haze, there was something inhuman, discouraging, about this landscape." "A shimmer of heat played over it, and one's feet squelched at each step, leaving bright black gashes." "Perez seemed very far away now, almost hidden by the heat haze; then, abruptly, he disappeared altogether." "But the heat had meanwhile much increased, and by some miracle fans had been procured for everyone: the jury, my lawyer, the Prosecutor, and some of the journalists, too . . . I wiped the sweat from my face
4 comments
Keep Reading

Alan Jacob's The Narnian: The Life and Imagination of C.S. Lewis. Because I like reading about my favorite authors' lives.

In my reading life I try to read as many authors as I possibly can, sampling this person's work before turning to another author. I'm pretty much spread out in that respect. But there are a few authors who make me want to read all of their books, as if there exists an invisible mental catalog; those I'm done with are already neatly crossed out. There's an inexplicably strong connection I feel with these people, my favorite authors—how their sentences are constructed, how their ideas flow, how they choose their words, and how they engage my emotion. It's a connection not unlike friendship—you can't verbalize why you like being with them; you just do. If people have rock stars or sports heroes, I have book authors. C. S. Lewis is one of them.
2 comments
Keep Reading

John Piper's Think: The Life of the Mind and the Love of God. Using our thought processes for God's greater glory.

I saw John Piper's book, Think: The Life of the Mind and the Love of God , on the book table 1 in church last Sunday and was intrigued by it. For why would he write, of all subjects, about thinking ? Except for mentally handicapped individuals, all of us pretty much think, to some degree. It's as natural to us as breathing. But there is a sense in which we do not think rightly. Either we think about the wrong things or we don't think at all. Either we are too caught up in the life of our mind (that is, in scholarly studies) or we're too emotionally-driven to do any proper thinking. "All my life I have lived with the tension between thinking and feeling and doing," writes Piper in the first chapter, a statement that shows how close the subject of thinking cuts to his heart. And anyone who is familiar with John Piper probably knows (1) that he spent a great deal of time—twenty-two years—of nonstop formal education plus another five years teaching in semina
2 comments
Keep Reading

Foremost: Looking back on my ICC Year

April 16, 2012
I thank God for the opportunity to join the Torchbearers youth camp 1 , a proper way of ending my ICC 2 year. The camp's theme couldn't have been more appropriate: 'Kaw Na, Wala Ng Iba. The theme verse was Psalm 73:25-26, Whom have I in heaven but You? And there is nothing on earth that I desire besides you. My flesh and my heart may fail, But God is the strength of my heart and my portion forever. Asaph wrote this psalm. It's among my personal favorites, and I recite it—rather, sing it to—myself often. But who is Asaph? We know from Biblical accounts that he served as one of King David's chief musicians (1 Chronicles 25:1-2), and that he wrote 11 other Psalms. Other than that, we don't hear a lot more about him in Scripture. Psalm 73 is interesting in that Asaph struggled with the question: why do the wicked prosper and the righteous suffer? Asaph understood that “God is good to Israel, to those who are pure in heart” (verse 1), but he got “envious of th
Post a Comment
Keep Reading

I wasn't sure if I could make it to the Youth Camp until last Wednesday, after the dreaded 17-part practical examination called the OSCE. The experience was arduous, painful, and tension-filled, so much so that one classmate allegedly pleaded with the consultant, 'Please don't fail me, Ma'am; I'll be a better person when you see me next year.' Her charms worked--she got a 90. But God was gracious in helping me get past the exam. I was praying the entire time. That afternoon I texted Kuya Lito, our youth pastor, that I could make it, after all. For now, here's the weekly dose of seven-plus photos. The summer heat was unbearable, if not for the sight of greenery and the occasional breeze. The basketball court was one of my favorite spots in Camp Jabez. Three of us--Jason, my brother, and myself--were assigned to man the basketball station during a group activity. This photo is proof that I can somehow dribble a ball.
Post a Comment
Keep Reading 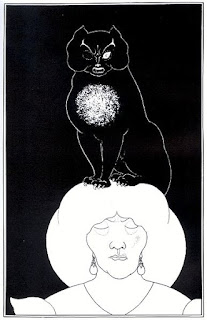 Illustration for "The Black Cat" by Aubrey Beardsley (1894–1895) I discovered audiobooks last week. Intrigued, I listened to two short stories of Edgar Allan Poe, all told from the perspective of the murderer. The first was The Black Cat  which was about a man who liked animals. Among his so-called pet collection, one cat particularly interested him. "Pluto—this was the cat's name—was my favorite pet and playmate. I alone fed him, and he attended me wherever I went about the house. It was even with difficulty that I could prevent him from following me through the streets." Eventually, though, he killed the animal by grasping it by the throat and cutting its belly with a pen-knife. This man was a psycho.
2 comments
Keep Reading

Days have progressively gotten hotter these past weeks. The heat bids one to do adventurous things. Had I lived a different life, I would be on vacation now—frolicking at the beach, perhaps, or climbing mountains. But I have a couple of exams to prepare for, so I'm stuck in my room for the moment.
Post a Comment
Keep Reading

Jesus's love is not cheap

Manong Ralph, my older brother, was invited to a Maundy Thursday reunion service and ceremonial foot-washing at a friend's church. It was his first time. He had every reason to get self-conscious, of course—his feet don't look too good.
Post a Comment
Keep Reading

Denial is my reflex reaction to news of death. I don't wallow in grief all at once; I walk away, pretend I never heard the news, and go on with whatever it is I'm doing. I think I got that from my mother. I only saw her cry about a month after my grandfather, Lolo Mauro, was buried. I was cleaning the mouse cages at Albert Hall four years ago when a friend told me that our classmate was found dead in her room. Hours later, I went home in disbelief. I then wrote in my journal, "I feel nothing, save for the croaking voice that is Melay's [the friend who called me] in my ear. I sit here on my bed, writing my thoughts down because I still couldn't digest everything." This morning felt just like that. The news of death for breakfast. Mawwi passed away at 5 am. Everything felt like a dream. She was only about a year old.
4 comments
Keep Reading

Thoughts on the Hunger Games movie

April 03, 2012
I finally got to watch the Hunger Games movie this morning 1 . These past days, friends have been posting their own mini-reviews of the movie online, especially those who claimed to have read the book before everyone knew of its existence. Most of them say it's good. —Jennifer Lawrence as Katniss Everdeen? The best move in making this film. She's perfect, almost like what I had imagined her to be when I only had the books. Even her voice is perfect: not too shrill, not too low either. It would have been wrong to pick someone else to play her part. —Josh Hutcherson (Peeta Mellark) and Liam Hemsworth (Gale Hawthorne) are great in their roles, too. Peeta really looks like a baker's son and Liam like a true hunter. Katniss will have a hard time choosing between them. —The cinematography is crazy, but in a beautiful kind of way. Some scenes can trigger vertigo, as a friend forewarned me, because the camera gets wobbly and the world is spinning to simulate a reality-TV ex
6 comments
Keep Reading
More posts