Showing posts from May, 2013
Show all

I CALLED HOME tonight to give my parents a quick weekly rundown of how I was doing. I wanted to give them the impression that I was alive and kicking—not entirely true, of course—and that they needn't worry.
Post a Comment
Keep Reading

LATELY I'VE been a regular customer at Toastbox, near—actually, beside—the Sta. Ana exit of Robinsons Manila. The restaurant chain is a hit in Singapore, where it originated. I always order the kaya toast set served with two softboiled eggs and homemade milk tea, even during lunch. Fell in love with it after the first bite. I like the place because there aren't too many medical students around. The couch is perfect for reading, especially in the afternoon when the light is bright but not blinding.
2 comments
Keep Reading

May 26, 2013
NOTHING LEAPED OUT of my screen when I watched The Newsroom, an HBO series about broadcast journalists who want to change the prime time TV news landscape. Halfway through the pilot episode I was bored. Apart from the witty, fast-paced conversations that I doubt would ever happen in real life, nothing else stood out. But I got so hooked that I would repeat watching the episodes over and over again.
3 comments
Keep Reading

Photo credit: Agnes Custodio CHARLIE was on his way to catch a flight to Davao. After having been gone for three weeks, the longest he's been away from home, he missed his mother's cooking and everything about his house in Mindanao. That explains why we were missing one person in the photo. I'd like to share a conversation I had with a patient I met during one of the pyschiatric screening sessions we had. The form we accomplished was more or less five pages long. My hand was tired from all the writing. The clinical experience was mostly drudgery, but some patients fascinated me I had to consciously keep a poker face and not burst out laughing. ME: Nagtangka ka na bang magpakamatay? Patient X: Opo, Dok. Me: Ilang beses? Patient X: Isang beses lang po. Kaso di rin natuloy kasi pag pasok ko sa banyo, napaka-baho. Hindi nabuhusan ang bowl. 'Di ko na tinuloy.
Post a Comment
Keep Reading

A new and living Way

May 23, 2013
I'VE BEEN reading Hebrews for my morning devotions these past few weeks. It's hard to miss the imagery of the Old Testament sacrifices, the necessity of the Levitical priesthood, the gore of the slaughtered lambs, and the flowing of gradually coagulating blood spilled year after year to atone for the sins of the people—ceremonies that highlighted the holiness of God, who cannot and will not let evil go unpunished.
Post a Comment
Keep Reading

Tsundoku and the story of my three new books

I LEARNED A NEW WORD today— tsundoku , which means "the act of buying books and not reading them." I like this word because I'm guilty of hoarding books, although I do read most of them. My problem has to do with the finishing of books. Alert me if there's a Japanese word for that, too.
5 comments
Keep Reading

About the shrieky teenager who could not steady her hands

FRANCES INVITED me to join her in a travel writing workshop conducted by Lonely Planet guidebook editor Greg Bloom along with other local travel writers. It was at Fully Booked, Bonifacio Global City, Taguig. Minutes into the workshop I had flashbacks of a similar campus journalism workshop I had when I was in elementary, the days when I had awful grammar, limited vocabulary, and bad lead sentences.
2 comments
Keep Reading

Maria Reiner Rilke's The Notebooks of Malte Laurdis Briggs: what your next-door neighbors probably think of you, if you're studying Medicine

May 18, 2013
I'M NOT YET done with Maria Reiner Rilke's The Notebooks of Malte Laurids Briggs.  The tone is depressing, for it was written when the author lived alone in Paris, plagued by poverty, left to fend for himself. I'm stationed at the Psychiatry out-patient clinics in the morning. I see many depressed people. Reading this novel helps me see the world from their perspective.
Post a Comment
Keep Reading

Excessive, but of the right kind

May 17, 2013
AFTER WEEKS of waiting I saw The Great Gatsby in cinema. I went to the 7:10 pm screening and was disappointed at the rather low turnout of viewers. I was surprised when, just a few minutes before the movie began, I spotted AA Agdamag, Jopi Arce, Tel Almanon, and Karla Araneta—classmates in med school—squeezing themselves in my row. I'm used to watching movies on my own, but they made great company.
2 comments
Keep Reading

AND MANONG RALPH celebrates his 28th birthday today. I can't thank him enough for the Christ-like example he showed me. I was drawn to Jesus when, ten years ago, I saw him praying and reading his Bible inside our room, as if he were talking to a dear friend, his face a combination of seriousness and delight. It was around that time when he shared the gospel to me, as a beggar, after having eaten in a feast, would instruct another how to get to the banquet. Then I realized that Christ radically changes lives. Christianity is real. For that, I'm eternally grateful.
2 comments
Keep Reading

Photo credit: Agnes Custodio NEUROSURGERY (NSS) wasn't a walk in the park as it was originally endorsed. At the ER I was monitoring five patients, three of them hourly. As the intern-on-duty I had to make sure all the CT scans were scheduled and performed, and the plates and necessary lab results should be available before the residents made rounds, usually at 10 am and at 8 pm. The job was mostly clerical, bordering on being a glorified errand boy, but it was the least the interns could do to help out in patient care. The NSS residents, chronically sleep-deprived, already had too much in their hands to start with.
Post a Comment
Keep Reading

I RECOMMENDED Truffaut's The 400 Blows , a black-and-white 1959 French film classic, to my friend Ching some years ago. She later told me the movie lulled her to deep REM sleep, such that when she had woken up, it was already night time. Sleeping through a film was something that had never happened to her before. Ching's confession, which still amuses me to no end, has led me to rethink my movie recommendations. I should pattern my tips to my knowledge of other people's tastes, which can change like the weather. Not everyone likes old films from way before the technicolor era. Not everyone likes films where they have to read the subtitles. My friend Leeca, for example, rejects all films I tell her to watch, saying, " Title pa lang, nakakaantok na. "
6 comments
Keep Reading

FINALLY FOUND the time to have my prescription lenses ground for the new pair of browline glasses I had ordered online. The fit is perfect, and I like it.
3 comments
Keep Reading

May 12, 2013
THE SLEEP-DEPRIVED neurosurgery resident instructed me to accompany a 60-year-old patient to the Philippine Heart Center for a CT angiogram, which our hospital cannot do, as it does not have the necessary equipment. Heart Center is in Quezon City, about 40 minutes away from PGH, and very near my brother's apartment. Because it was my first out-of-PGH patient conduction, I had no idea what to expect. Inside the ambulance I studied the patient's history, just in case I'd get asked. I didn't want to embarrass my home institution by displaying my ignorance to the world. The patient had an aneurysm in the brain; unless surgical intervention was done, the vessel could burst any minute, possibly causing irreparable neurologic and mental function, even demise.
Post a Comment
Keep Reading 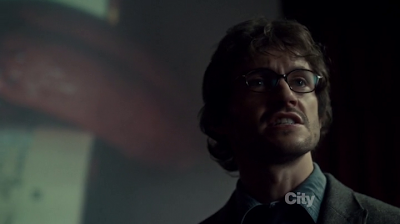 1. Will Graham's eyeglasses. They look great on him. Hugh Dancy plays him well—the FBI special investigator who can relive the crime and see it from the killer's perspective. His gift defines him: he hates working with others, he lives alone, and he has the most terrible dreams. He has night sweats, is sometimes found somnambulating, and is almost always bothered by something. Sounds like a psychiatric case to me.
3 comments
Keep Reading

I ASKED my block if we'd care to have our group photo taken. For posterity, I said. "We should invest in memories" were my words exactly. Agnes said yes, she'd bring a camera. The next day I noticed that she carried a bulky handbag. When I inquired what it was (I was hoping she had brought homecooked meals to share with everyone), she said, "Didn't you ask me to bring a camera? Here it is." An SLR, ladies and gentlemen. Just what I've always dreamed of having: a blockmate who knows ISOs, shutter speeds, and the Golden Period. I told her we should make it a ritual of sorts: the post-rotation portrait.
5 comments
Keep Reading

May 07, 2013
AT THE Psychiatry Ward, my patient, diagnosed to have schizophrenia, sings his heart out, much to the dismay of the other psychotics in the area.  The song is a familiar OPM classic whose title I forget. He reminds me of my brother Ralph who, when taking a shower, sings as if the world were his stage. As I retrieve his chart from the nurses' station he asks me, " Dok, totoo ba na ang mga doktor hindi namamatay ?"
Post a Comment
Keep Reading

AFTER YOUTH FELLOWSHIP this afternoon I decided to get a new cheap pen, another Parker Jotter ballpoint, to replace the one I had lost at the Delivery Room toilet last March. That pen, which had lasted me two refills, jumped out of my scrub suit when I took a leak.
2 comments
Keep Reading
More posts