Showing posts from May, 2009
Show all

Excuses for not bringing a pasalubong

Pasalubong is a Filipino idea. When you go somewhere far, your friends expect you to bring something from the place you've been to--a beaded necklace, a carved granite stone, a big box full of chocolates, or anything else for that matter. This practice accomplishes two things: (1) it proves that you did go somewhere far, and (2) it shows your affection for those you had left behind because, well, when you bought that wood carving of a man in a barrel, you were thinking of the people you love. I remember Dr. Laura David of the Marine Science Institute who said that this practice has its roots on our being an archipelago. When people hopped from one island to the next, they had to bring a proof that they've been to this or that place. Somewhere along the course of history, the concept of pasalubong has been thoroughly ingrained in our culture so much so that people, no matter how poor they are, would do their best to bring something back. My problem is, whenever my friends he
4 comments
Keep Reading

I'm leaving for Koronadal tomorrow. I could've opted to stay here, but I wanted to have some retreat, just before med school starts on June. I want to finish begin reading Wayne Grudem 's Systematic Theology, an excellent book to guide any growing Christian. I also want to spend more time meditating on the Bible. Ah, what rest! That means blog upates are going to be sparse, save for the weekly diptychs I've programmed to be posted on the following two weeks. I'm bringing my heavy desktop computer back home, so I'll be carrying a lot of boxes. Imagine how I'll fare. May my bones be strong and my muscles be sufficient to carry all the load. The photo shows a plant right outside of the Matiwasay apartment where my brother lives. He and his housemates are leaving tomorrow for another place. I'll miss this cozy, little house.
3 comments
Keep Reading

May 10, 2009
I feel sorry for Martin Nievera. Considered one of this country's finest, he represented the country by singing the national anthem during Manny Pacquiao's momentous bout against Ricky Hatton. The match was well-publicized, and everybody looked forward to seeing it with unmatched anticipation. He rendered the Philippine national anthem with a melody and arrangement so characteristic of him: you wouldn't mistake anyone else singing it. But what should have been a matter of national pride turned into blatant criticisms of sorts. The National Historical Institute (NHI) pointed out that he did not sing Lupang Hinirang properly: it's a march and should be sung that way. Martin also ended with a higher, prolonged note. If you've been watching the news, you'll see the performance repeated time and again. If not for this and the accusations that other singers in the past had faced, the public would not have been made aware of the existing law called RA 8491 (The Fla
4 comments
Keep Reading

Michael Fray's Spies: innocence, memories, and the will to remember 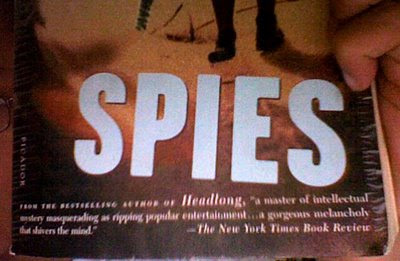 When Agz Chaves handed me the book, she confessed she had a hard time deciding whether to give it or keep it to herself. It's that good, she claimed. I could imagine how painful it is to part ways with a book one dearly loves. Touched by the gesture, I promised to read it as soon as possible. The book is Spies by Michael Frayn . Stephen Wheatley, the main character, recalls the past as he visits his former home where he grew up during the World War II: Everything is as it was, I discover when I reach my destination, and everything has changed. As he walks along old familiar paths, he recalls that life-changing summer when his best-friend, Keith Hayward, "calmly and quietly [dropped] the bombshell": mere six words that would set the story in motion. From then on, both of them—Stephen and Keith—would engage in boyish activities, pretending to be spies, watching other people's heads. This is where the book gets its title. The story's pretty simple, actu
Post a Comment
Keep Reading

Jack Kerouac's On the Road: a drunken man's journey across America 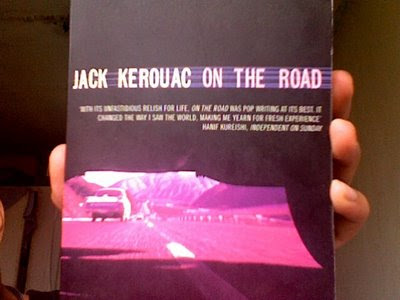 While I've always loved traveling, I haven't come to a point in my life when I just needed to go somewhere else. I didn't realize people with those tendencies do exist until I read On the Road by Jack Kerouac . On the Road is largely based on the experiences of the author himself, together with his friends, who journeyed across mid-century America (late 1940s). It's written in a style Kerouac calls spontaneous prose, an interesting way of telling a story, especially when used to recall the ordeals and experiences of a traveler. The story is told from the viewpoint of Sal Paradise, a writer recently divorced, who wants to travel back and forth mainland America. But the story doesn't revolve around his story but from Dean Moriarty's. One could call Dean crazy and downright irresponsible, but he is someone who doesn't care about anything else but to relish life and find meaning in it. The book is probably the best way to illustration the new beat generati
4 comments
Keep Reading

This is a few days late, but the message isn't just true for April. I'll spend the summer break soul-searching, just in time for the riotous med school life which starts on June.
Post a Comment
Keep Reading

May 03, 2009
I trooped to Pansol, Calamba City, Laguna with friends from church for the youth outing. A most refreshing getaway it was! Kuya Lito exhorted on 2 Timothy 2:22, emphasizing the importance of accountability and one-anothering s. He zeroed in on the fact that Christians must pursue righteousness, faith, peace, and love together . That's God's amazing design. We spent our Fridays and Saturdays wading in the pool, eating with bare hands, playing Risk (that amazing game Kito and Koji introduced that brought out the pride in us), and getting to know each other more. During our group discussions, we were each asked to share our testimony. If we were to be accountable to one another, we should at least know how we came to a saving knowledge of the Lord. I was praising God for His miraculous work in my friends' lives. On the way home that afternoon, Koji's vehicle took a sharp turn. It probably bumped upon something sharp. A tire was severely deflated. It was a good thing K
Post a Comment
Keep Reading
More posts