Graham Greene's The End of the Affair: what you can read after a painful breakup 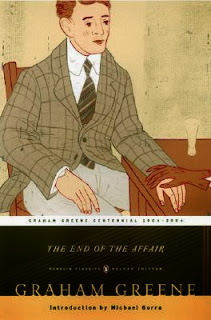 GRAHAM GREENE'S The End of the Affair figures in the top three of Slate Magazine's best breakup books. That's one of the reasons why I embarked on it, the other being that the novel bears an interesting title, and I wanted a good love story.

I don't know about you, but I've never been heartbroken—not in that sense. But I've had the privilege of hearing personal stories from friends who, at some point, had taken the leap of faith, had begun what looked like a promising relationship that eventually fell into pieces. From what I've  gathered, I have come to this conclusion: that a breakup is a painful, agonizing process, like an impacted tooth that demands all the attention and prevents other pleasures to be had.

The End of the Affair is a story of anger and hatred, passion and longing, and the desire to possess what is one not meant to have. It is told from the viewpoint of Maurice Bendrix, a famous writer, who falls in love with Sarah, wife of the high-ranking civil-servant Henry Miles. The story is complicated: Henry comes to Maurice for advice. Henry is dense and clueless; he doesn't realize that something is going on between Maurice and Sarah. Henry is reminiscent of the character John Dowell in The Good Soldier (Ford Madox Ford): he, too, doesn't know his wife has been cheating on him.

Immediately it occurred to me why it's a good breakup novel: the expressions of bitterness and rage border on comedy. Consider the following account, where Henry and Maurice meet in a pub after Henry begins to suspect something's not right.

While Henry fetched the drinks I went into the lavatory. The walls were scrawled with phrases: 'Damn you, landlord, and your breasty wife.' 'To all pimps and whores a merry syphilis and a happy gonorrhea.' I went quickly out again to the cheery paper streamers and the clink of glass. Sometimes I see myself reflected too closely in other men for comfort, and then I have an enormous wish to believe in the saints, in heroic virtue.
I repeated to Henry the two lines I had seen. I wanted to shock him, and it surprised me when he said simply, 'Jealousy's an awful thing.'
'You mean the bit about the breasty wife?'
'Both of them. When you are miserable, you envy other people's happiness.'

You can browse through this list to entertain yourself.

Towards the end of the book we discover the reasons for the love affair: the coldness of the marriage that denigrated into mere companionship vis-á-vis the unhindered lust for fleshly pleasures. It is a tragedy, as forbidden love is almost always bound to be.

If your girl- or boyfriend has left you recently, embark on this book, and you'll laugh at your troubles. You will feel so much better: Maurice, after all, has gone through worse. And isn't it true that misery loves company?

March 04, 2012
I met old friends from college last Saturday. We had breakfast at an old restaurant along Ongpin Street called Saludo's. Some of us went to Logos Hope, a ship with lots of books inside it—some 5000 titles, we were told. The sun was hot, in a cancerous, melanoma-inducing kind of way. Summer is just right around the corner. Took us a while to get inside the ship. I thought this view of Manila's skyline from one of the windows was amazing. We saw what we came for: books. They were sold in "units" that had a corresponding peso conversion. The books sold cheaply, so I got David Copperfield by Charles Dickens for 150 units (Php 150). I plan to read at least one Dickens novel this year, 2012 being his 200th birthday. (I'm ashamed to admit I haven't read a single novel of his, ever). I saw Nancy Drew, Hardy Boys, classics, modern fiction, modern Christian literature, biographies, medical and nursing textbooks, and children's books. Visit
24 comments
Keep Reading