José Saramago's All the Names: chronicles of a bored stalker 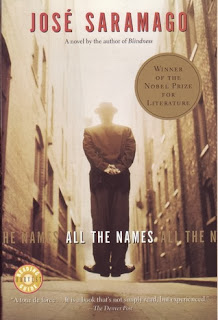 NOTHING MUCH happens in All the Names, the novel by Portuguese Nobel laureate José Saramago, but after reading it I felt as though I'd been through a lot.

It is, in summary, a chronicle of the events in the life of Senhor José, a clerk who works at the Central Registry of Births, Marriages and Death. Bored with his clerical job, he stumbles upon the record of an unknown woman and decides to snoop around and discover everything about her.

Whether it is boredom or curiosity that launches his obsession with this woman we cannot explain, in the same way that we can't always come up with reasons for the things we do. Saramago has this to say about the absurdity of human action:

Strictly speaking, we do not make decisions, decisions make us. The proof can be found in the fact that, though life leads us to carry out the most diverse actions one after the other, we do not prelude each one with a period of reflection, evaluation and calculation, and only then declare ourselves able to decide if we will go out to lunch or buy a newspaper or look for the unknown woman.

I don't agree with this, of course—we're accountable for our own decisions. But there is a sense in which this is right, in that the consequences of our decisions also define our lives.

The story revolves around him—the inner workings of his mind, his conversations with his ceiling (that also answers him back), his paranoia. His is a lonely life. He has no friends, and his constant companions are the sheets of paper and the pens he uses every day. Everyone, except Senhor José, remains nameless—it is almost impossible to read this novel and miss the feeling of isolation.

The concept of the Central Registry is intriguing. It is an archaic government institution, perhaps similar to the Philippines' National Statistics Office, where the "dead" and the "living"—their records, at least—are kept with ceremonial tact and precision. The Central Registry building is so vast that some clerks have died because they got lost in the labyrinth of the archives. The solution: the clerks use a thread tied to their ankles, so they can find their way back. The all-knowing Registrar, the head of the office, also adds to the mystery.

Come to think about it. Senhor José's adventures are hyperbolic representations of online stalking, only better. These days, if we have crushes we merely access their Facebook accounts or blogs anonymously. But Senhor José takes the extra mile: he actually traces the unknown woman's apartments, schools, and places of work. He talks to the woman's family and discovers untold secrets. Is it possible, then, to know someone intimately that way? Has he fallen in love with a woman he has never met?
reading