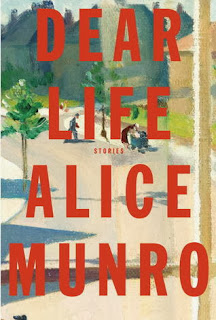 YOU MUST'VE heard the news: Alice Munro has won the Nobel Prize for Literature this year! I must've read some of her stories in The New Yorker, but I don't remember any of them anymore. Got myself a copy of Dear Life, her short story collection, the last book she said she will ever write. Will try to read through it tonight. I've been enjoying short story collections recently. Just this afternoon, I began reading Julian Barnes' The Lemon Table. Recently I finished James Salter's Dusk and Other Stories. It's a long weekend for me. Good night, world!

The second story, Amundsen, is breathtaking. Here Munro takes us to a sanatorium where a young teacher sets out to work. Her pupils: children with tuberculosis. So you realize it was at the time when streptomycin was still in the works, and surgery was the main treatment. She meets a doctor, ten years older than her. He sets the rules of the place—a dreary, gloomy, death-saturated institution—and, in a much significant way, he also dictates her life because she has allowed him to. She has wanted him to. Read the story in full at The New Yorker, where it first appeared, and wait for that final sentence that knocks you right in the head. Suddenly everything makes sense.

Leaving Maverly is a story of transformation. We encounter the girl Leah who works as a movie ticket collector against her conservative family's wishes. Movies then were socially unacceptable for some ultra-conservative religious sects. Leah leaves home one day, disappearing out of the picture, and, just as the search for her is deemed futile, she writes a letter to the church minister, and says she has married his (the minister's) son, a jazz player.

"Some people get everything wrong. How can I explain?" begins the story, Pride. A man born with a cleft lip remembers the life of a rich girl called Oneida, whose father was implicated in a money mismanagement scandal years ago. Her father long dead, Oneida now lives alone in her ancestral home, until she decides to sell it—to a scheming businessman, of all people, who only has the house demolished and who builds an apartment instead. The most tragic thing in the story: with nowhere else to live, Oneida buys a unit in the apartment. Given a choice between a regular bungalow built on land or a grand condominium unit, I'd pick the former anytime.

Corrie is the woman with unequal leg lengths. Now I'm beginning to wonder what it is with Alice Munro and physical deformities. So Corrie starts a secret affair with a church architect whose project involves renovating the Anglican church in the neighborhood. Corrie's former house help—a bright, promising girl named Lillian—blackmails the two of them, threatening to spill all secrets to the architect's wife. Corrie pays her off. Years later, news gets to Corrie that Lillian is dead. Thinking that she is finally free—free to continue the affair, without the threat of being found out—she realizes the truth. What happens next, Alice Munro leaves to our imagination.

The final four stories are not stories per sé. "They form a separate unit, one that is autobiographical in feeling, though not, sometimes, entirely so in fact. I believe they are the first and last--and the closest--things I have to say about my own life," writes Munro. The Eye is about a woman who used to work for her family's household. Night recounts her experience with appendicitis and her bouts with insomnia. Voices paints a picture of her mother and the town dance they attend; there she meets a notorious woman in the neighborhood, a prostitute. Dear Life is about her house at the end of a long road in rural Canada. The probinsyano in me yearned for the peace and quiet as I read the last account.

A dirt road leading to a Baptist church where I was asked to speak to a group of young people when I visited a barrio in Bukidnon (May 2012). I remembered this place after I read Dear Life.
reading