James Salter's Dusk and Other Stories: the power of a sentence 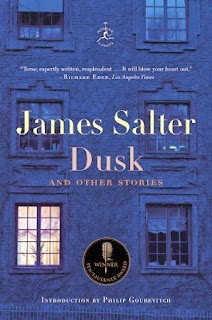 JAMES SALTER knows the power of a well-constructed sentence—short, crisp, yet evocative. His armament lies in his understatements, which turn out to be explosions of feelings, or sudden twists in the tale. Reading him is an overwhelming, exhilarating experience. You fall into a trance. You're sucked right into his imagination, as in a black hole. Your mind bursts with cinematic pictures, and you emphathize with the characters because you know what they're going through. You see bits and pieces of yourself in them. If you dream of writing stories of your own, you probably wish you could write like Salter.

I started reading his collection, Dusk and Other Stories (1989), in between surgeries. Ordinarily a medical intern chooses to sleep in a corner, oblivious to the intermittent alarms of the cardiac monitor and the buzzing of the cautery devices. But I was captivated by the beauty of his prose and the elegance of his tales, and I finished the book in less than 24 hours.

I had read Light Years and A Sport and a Pastime before, both full-blown novels that took me to Europe and made me see the complexity of romantic relationships—but Dusk was something else altogether. It may well be my favorite among Salter's works.

It opens with Am Strande Von Tanger (The Paris Review has published the entire story, which you can read for free!). The opening line—"Barcelona at dawn. The hotels are dark. All the great avenues are pointing to the sea."—made me long for Barcelona. I wish I could visit the city before I die.

My favorite is Dusk. The character Mrs. Chandler lives alone, and when one reads about her, one feels the pangs of loneliness. One doesn't even have to go through a tough divorce to realize that. Here Salter paints a break-up scene with economy of words, a technique he seemed to have already perfected.

She remembered the night they came from from dinner at the Werners' where there had been a young woman, very pure featured, who had abandoned her marriage to study architecture. Rob Chandler [Mrs. Chandler's husband] had said nothing, he had merely listened, distracted, as if to a familiar kind of news. At midnight in the kitchen, hardly having closed the door, he simply announced it. He had turned away from her and was facing the table.

He started to repeat it but she interrupted.

"What are you saying?" she said numbly.

He had met someone else.


Someday I shall read his stories again.

March 04, 2012
I met old friends from college last Saturday. We had breakfast at an old restaurant along Ongpin Street called Saludo's. Some of us went to Logos Hope, a ship with lots of books inside it—some 5000 titles, we were told. The sun was hot, in a cancerous, melanoma-inducing kind of way. Summer is just right around the corner. Took us a while to get inside the ship. I thought this view of Manila's skyline from one of the windows was amazing. We saw what we came for: books. They were sold in "units" that had a corresponding peso conversion. The books sold cheaply, so I got David Copperfield by Charles Dickens for 150 units (Php 150). I plan to read at least one Dickens novel this year, 2012 being his 200th birthday. (I'm ashamed to admit I haven't read a single novel of his, ever). I saw Nancy Drew, Hardy Boys, classics, modern fiction, modern Christian literature, biographies, medical and nursing textbooks, and children's books. Visit
24 comments
Keep Reading