William Boyd's Waiting For Sunrise: an actor is a spy 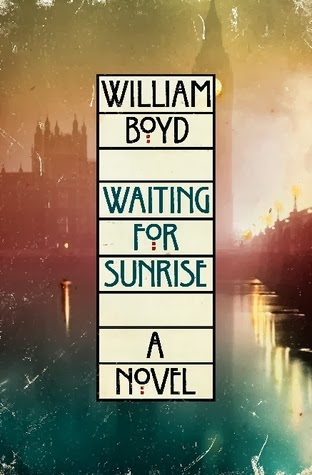 WAITING FOR SUNRISE is William Boyd's newest novel. The protagonist is 27-year old Lysander Reif, an actor, who goes to Vienna to consult with a certain Dr. Bensimon, a psychiatrist, protegé of Sigmund Freud. Dr. Bensimon prescribes a new mode of psychotherapy called Parallelism in which the patient imagines an alternative reality during hypnosis. Meanwhile Reif stumbles upon an intriguing lady named Hettie Bull, an Englishwoman living with a famous and rich artist, and he begins a passionate affair with her. He is cured of his ills, or so he tells Dr. Bensimon, but his encounter with Hettie brings about events that will change his life dramatically: he gets Hettie pregnant, he is arrested for rape, and he flees Austria under a disguise, never to come back again.

He resumes his life in London, whiling his time away in the theater, until he is called for military service. The war against Germany has begun. As if it were a coincidence, he bumps into people who've helped him escape from Vienna. He is recruited to be a spy and agrees to be one because it would absolve him of his incurred debts to Her Majesty's government. His mission is to go to Geneva to find the person with the cipher needed to decode crucial military information. Someone has been leaking information to the Germans--hence, the failed attacks.

After recovering from a near-death experience on his way back to English soil, he works on a cover mission at the otherwise boring Directorate of Movements at the War Office. His goal: to find Andromeda, the code name for the German spy. His clandestine bureaucratic maneuverings bring him closer to home.

Reading Waiting for Sunrise was a worthwhile experience, for isn't it true that when we read, we live a thousand different lives? I read of a 27-year old man, practically my age, who travels to Europe, living alone on foreign soil, eating in cafés, watching plays and all. If only it were so easy--and cheap--to go there and travel, and do so alone.

Boyd, an Englishman himself, paints a detailed geography of the cities, naming familiar landmarks and streets and rivers. During the past three days that I've spent reading this book I wished that I, too, were in Vienna and London and Geneva. I envied Reif and his European adventures, but not his choices in life and the consequences he had to deal with.
reading