June 23, 2020
Of all the graduations I’ve had, today’s virtual ceremony will stand out in my memory. I was in bed, my ears plugged to bluetooth earphones linked to my laptop. I logged in Zoom at 8:58, two minutes before the rites began. On the opposite side of the small condo was my brother, who was in a separate online meeting. We could hear each other mumble, but not enough to make out the actual words.

Drs. Vanessa Co (Gastroenterology) and Deonne Gauiaran (Hematology) hosted the event. They were, at some point, my senior fellows when I was a fledgling Medicine resident. They’re consultants now, official members of the Department of Medicine’s stellar faculty. I remember that Ma’am Van sat with me and my friend Carlos Cuaño (who would himself proceed to gastroenterology training) to help us prepare our end-of-rotation report on pancreatic pseudocysts. Sir Deonne was our chief resident when I was a first year IM resident. (He has done so much and so excellently, and we’re only about the same age.) I looked up to them then, and still do today.

There was the invocation and the singing of the National Anthem. Should I stand? I was, by now, propped up by two comfortable pillows. I was in a white shirt and comfortable shorts. I pulled the curtains to block the morning sunshine. I decided to lie still. Nobody could see me anyway.

Dr. Carmencita Padilla, the UP Manila chancellor, spoke about the Covid-19 pandemic and World War II. In both these events, she said, UP PGH continued its operations. There was never a lockdown. I imagined that there would be applause, had Dr. Padilla addressed us face-to-face, but I cheered for her in my mind. I felt blessed to be part of this hospital; PGH would always be a part of me.


Virtual graduation today. Dr. Carmencita Padilla, chancellor of @UPManilaOnline, says UP Phil General Hosp has never been on lockdown since the COVID-19 pandemic. She says that even during World War II, the hospital was open to serve. pic.twitter.com/zUZDhCDrC4
— Lance Catedral (@lanceoncology) June 23, 2020

Dr. Gerardo Legaspi, the director of the Philippine General Hospital, challenged and encouraged us to see what’s ahead, to imagine the best for the country.

Dr. Charlotte Chiong, dean of the UP College of Medicine, applauded the bravery and resolve of everyone in the virtual room.

Dr. John Añonuevo, the chair of the Department of Medicine, said that the “only thing we are certain of is that there is a future for you.”


Dr. John Añonuevo, chair of the Dept of Medicine of UP PGH, says the “only thing we are certain of is that there is a future waiting for you.”

Dr. Ester Penserga, distinguished internist and rheumatologist, quoted Proverbs 16 in her keynote address.  I am proud to say that I was once under her Gen Med service, even if it was towards the tail end of my training. She liked asking the basics, things I thought I knew but only knew partly—which was just as worse as not knowing entirely. When she announced that she would do teaching rounds with the students, I would study my books in a corner. If the clerks and interns could not answer her questions, she’d ask the junior residents. If they couldn’t give a satisfactory reply, she’d ask me, the most senior resident of the team. If I couldn’t answer her, she’d say, “Read.” But it was always with a motherly tone, an encouraging rebuke. She proceeded to talk about her seemingly accidental foray into rheumatology when she had wanted to be an endocrinologist. She saw God’s hand in this. I was so blessed and encouraged.


Dr. Ester Penserga, distinguished internist and rheumatologist, quotes Proverbs 16 in her keynote address. “A heart of man plans his course, but the Lord directs His steps.” Such a blessing to know her! pic.twitter.com/iQl9Q9WRuZ
— Lance Catedral (@lanceoncology) June 23, 2020

Our names were called. If this had been an actual ceremony, there’d a contest of the wittiest introductions. But without the exchange of energy that speakers get from the audience, the tone was generally subdued. There were no hilarious moments on stage, no pakuló, no shameless selfies. But I took photos of my screen. My friend David (endocrinology) messaged me that I could do screenshots instead, with the Shift + Command + 4, but I said I liked the raw quality of the photos. It felt like a ritual: taking the photos, storing them, and revisiting them in search for possible blackmail material.

There were the once-first year residents I used to work with. Special shout outs to those with whom I had the pleasure of being a service senior: Nico Pajes (who is the department’s brilliant and indefatigable chief resident), Harold Chiu, Greco Malijan, Ray Ragasa, Inah Coronel, and Josh Torres. (If I missed anyone, please alert me: faces blend in my memory. I have worked with them at some point, at MICU, the ER, and so on.) 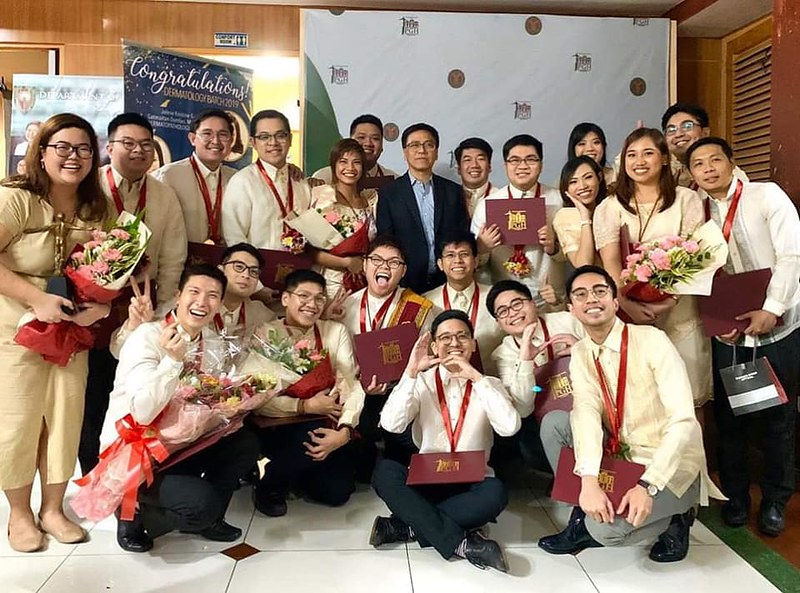 [Related post: notable blog entries during my Gen Med years: My First GenMed Service, Sticking Our Necks Out, Counting the Days, and Ode to Our Interns.]

I only took photos of my residency batch mates and co-fellow graduates from Medical Oncology, unfortunately. 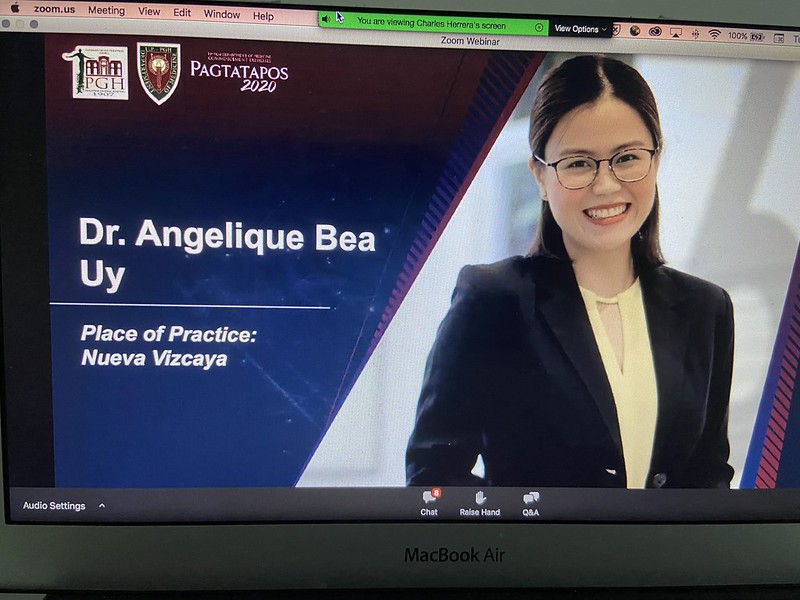 “a scholarly and brilliant man” 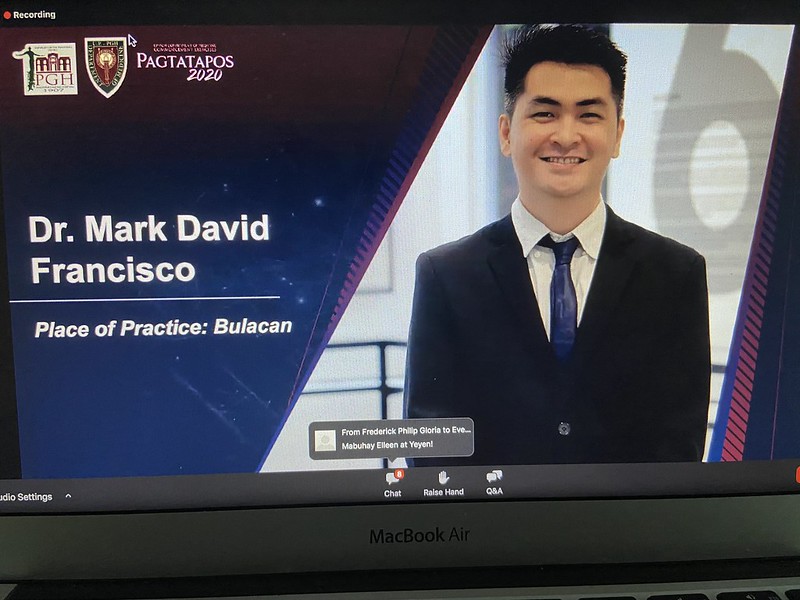 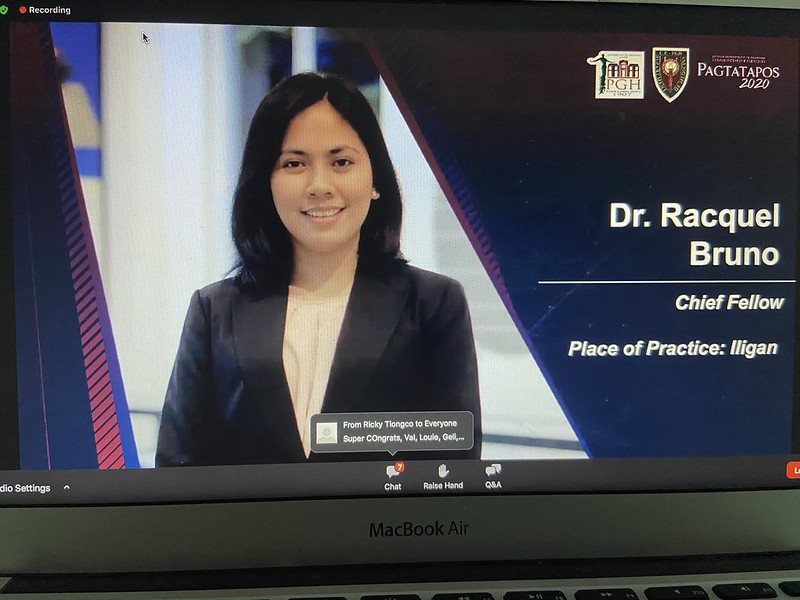 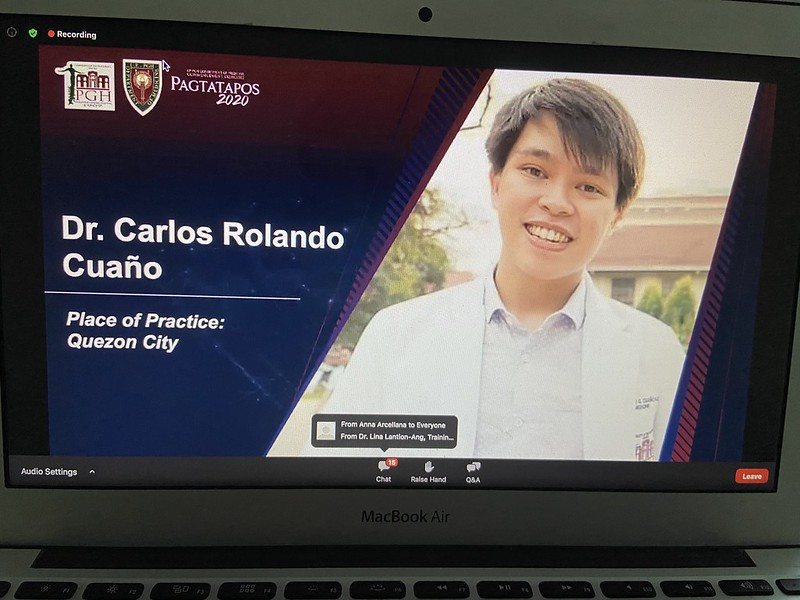 “savvy scholar whose muscles are as big as his brain” 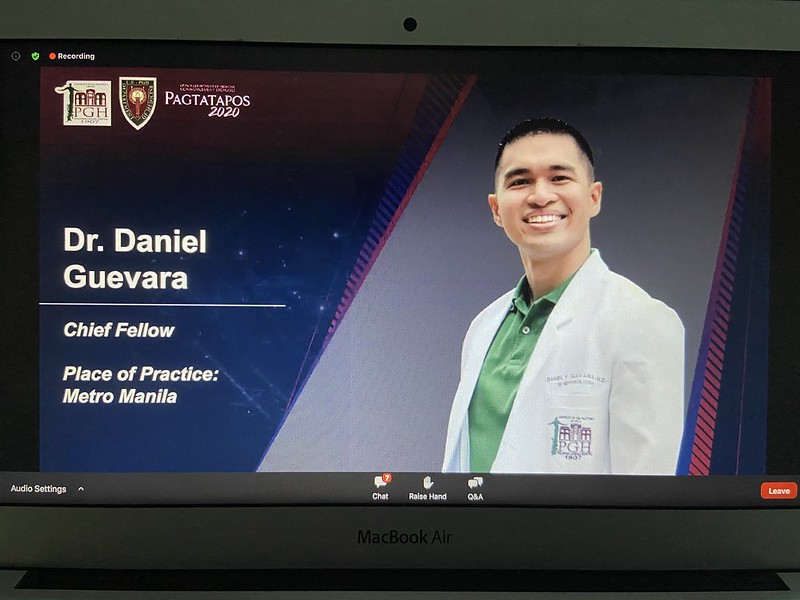 “determined to forge her own path; a ready resource for clinical decision-making” 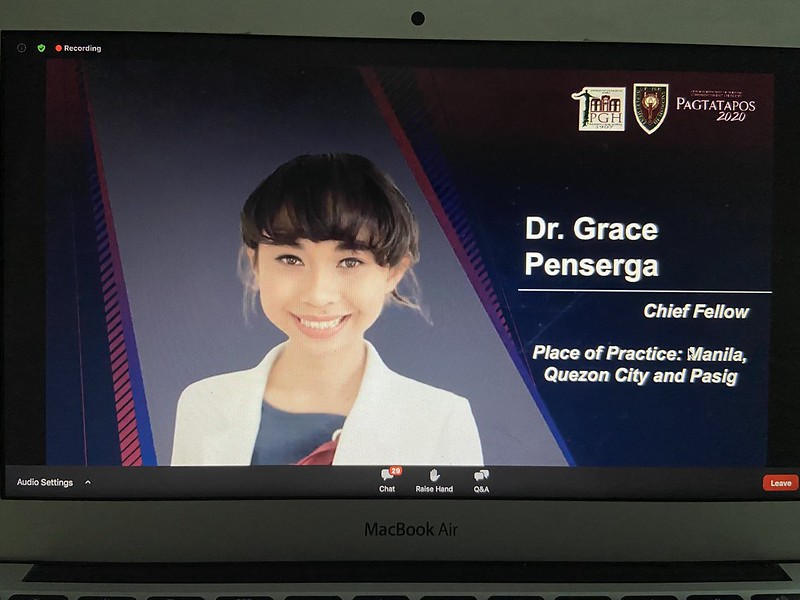 “with great resourcefulness and humility” 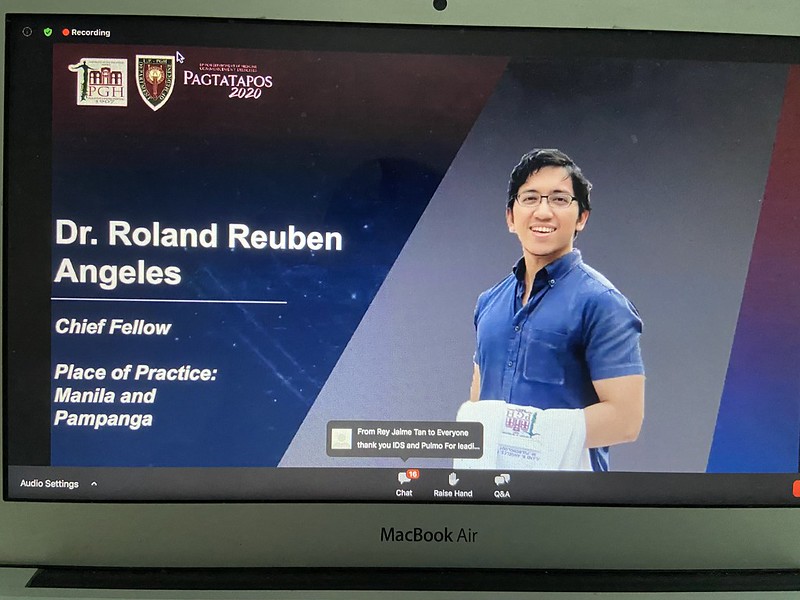 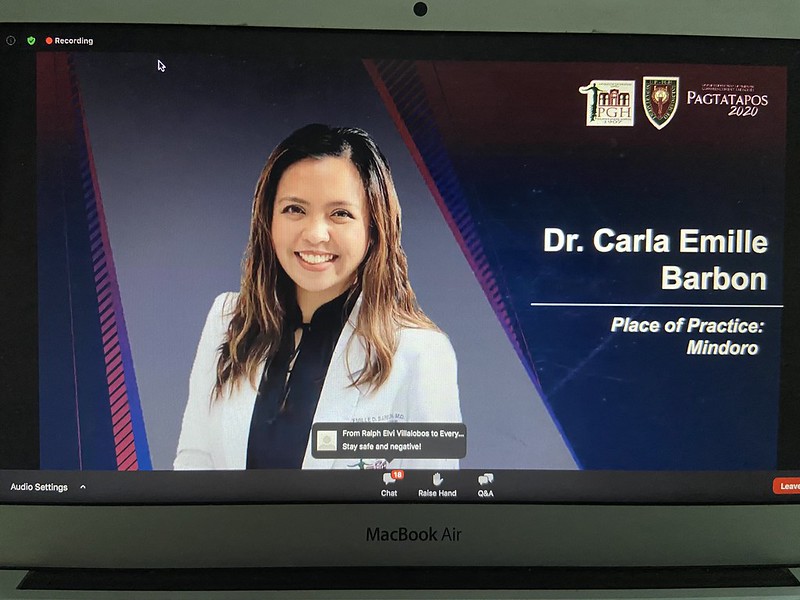 “clarity of mind and strength of character” 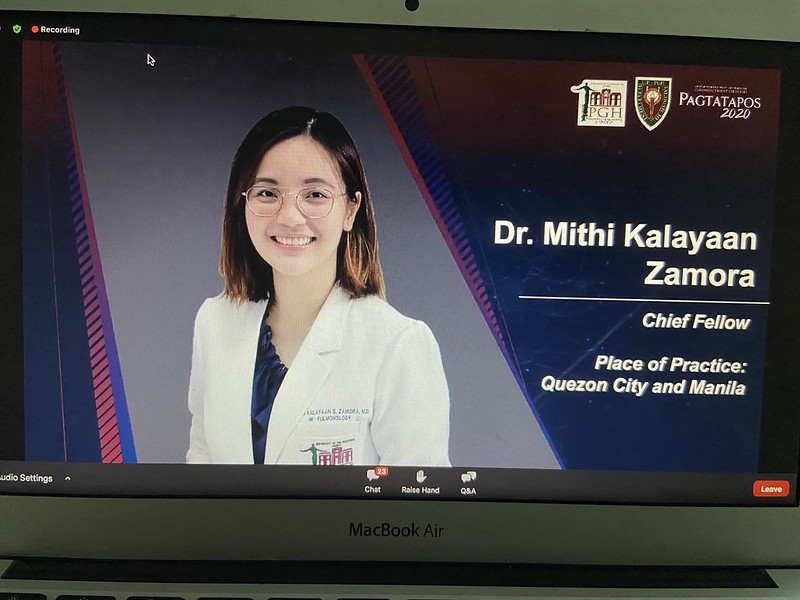 “Rich is quiet and serious. He is often immersed in his work but shows empathy and compassion towards his patients and colleagues. As the chief fellow, he was able to juggle administrative duties with clinics and research endeavors. He relaxes with video games, YouTube gardening channels, and music. He sings well. He plans to practice in Metro Manila and Central Luzon.” 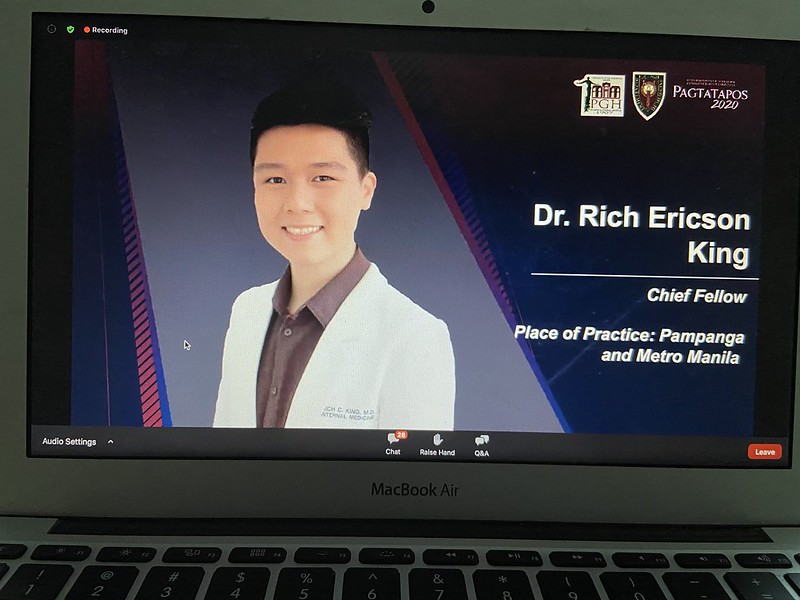 “Karen is practical and level-headed. As a mother, she was able to juggle family responsibilities with work and training. She made it look so easy. She likes good coffee, spoken poetry, and creative stories. She enjoys playing with her daughter, painting, and staying at home. She plans to practice in Metro Manila.” 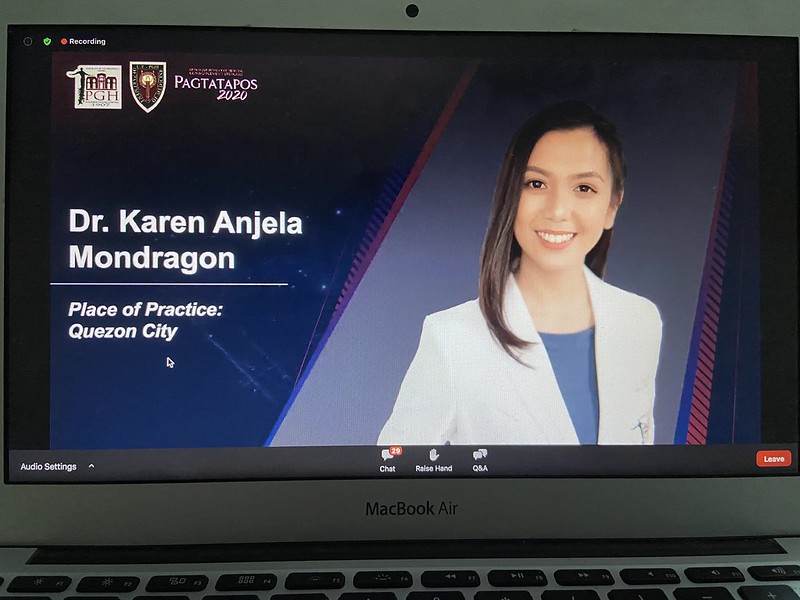 “Fred is determined and productive. Although he operates on a strict schedule, he can easily be dragged to random coffee breaks. He has numerous research outputs, especially on supportive care and access to oncologic treatment. He loves connecting with patients. He reaches out to them and seeks to understand them. He likes to travel, tinker with fountain pens, and write essays or commentaries. He plans to practice in Bacolod City.” 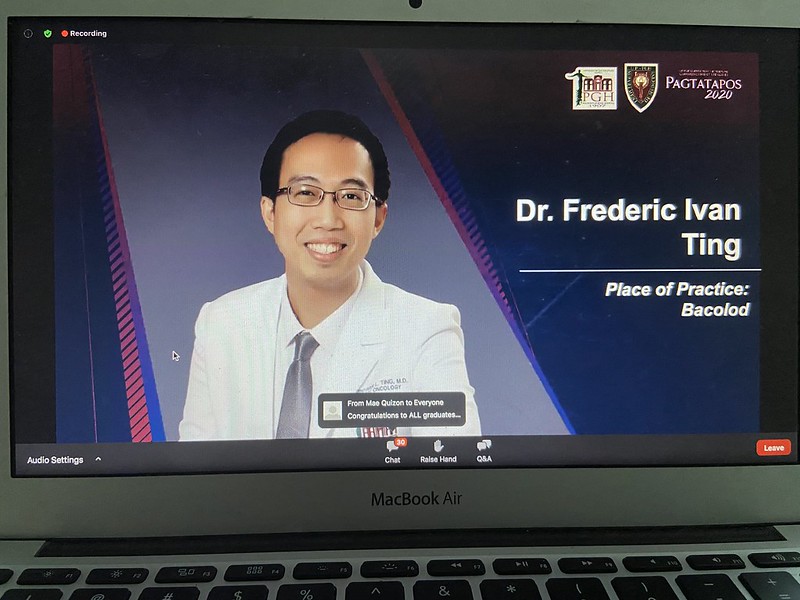 “Roger is compassionate and adventurous. His patients love him. Each morning, they form an impenetrable crowd outside the clinic. But he takes his time to talk and listen to them. He takes the extra mile to extend comfort and care. He likes to travel, though he often gets lost. He also likes to take photographs of sunsets and of his growing plants. He plans to practice in Metro Manila.” 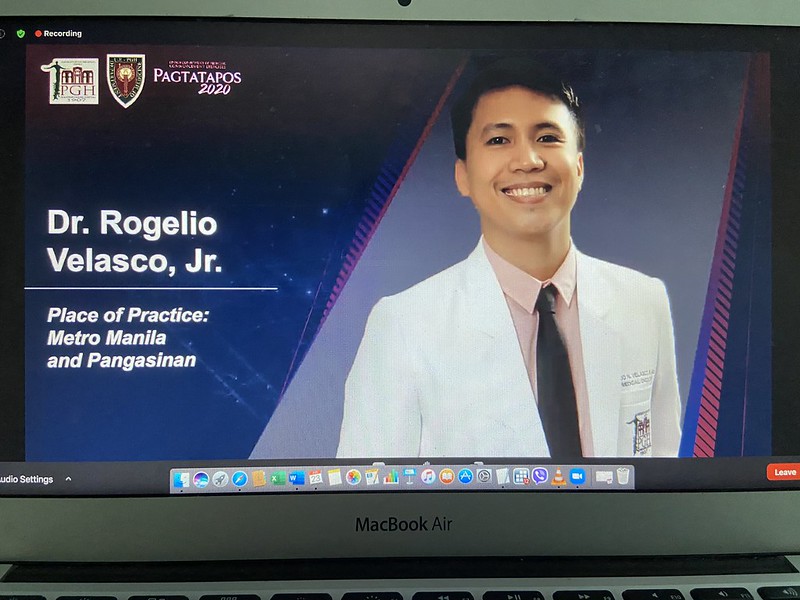 There was a sweet shoutout from the amazing Dr. Cecile Jimeno!

The awardees were called. This was the surprise prepared for the expectant crowd—that is, us, mere mortals. Harold Chiu (third year), Amiel Villanueva (second year), and Ella Mae Masmayor (first year) won the Most Outstanding Resident Awards. Harold, who also topped the diplomate IM exam, is a brilliant and resourceful doctor, having published several researches even in his first year. I experienced being his service senior, a privilege I’m thankful for. Amiel, the quiet and contemplative doctor from Davao, holds a special interest in medical ethics. His Twitter feed is a great resource for his thoughts. Ella maintains a blog herself. One of my favorite pieces she wrote is When Sadness Has No Name. In this piece, she shows her humanity. I think the most humane doctors are the best doctors.

Greco Malijan gave the speech in behalf of the graduates. What struck me was how on point Greco put everything in context. He said that health is political. The pandemic has uncovered the pervasive inequalities in Philippine society. Always a voice of reason and compassion, Greco is also an excellent clinician. I’m also proud to say I was one of his senior residents, but I absolutely don’t take credit for any of his greatness.


Health is political, says @grecomark, in his response in behalf of the graduates. The pandemic has uncovered so many inequalities in society. So heartwarming to listen to a voice of reason and compassion. pic.twitter.com/VbxiEOgowo
— Lance Catedral (@lanceoncology) June 23, 2020

This will go down in the books as one of the best graduations I ever had. I praise God for His enduring faithfulness and goodness.
daily medicine oncology