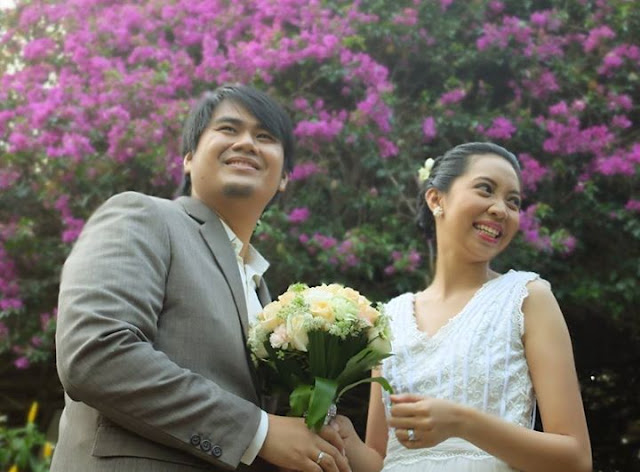 Luther and Mau. Photo by Mike Tan, not the UP Diliman chancellor.

TWO MONTHS ago I hurriedly finished my rounds to catch a quick bus ride to Tagaytay. My dear friends, Luther Caranguian and Maureen Estacio, were getting married in a few hours, and I couldn't afford to be late. I was part of the entourage as one of the groom's men, which explained why I was in a white polo barong, carrying a well-made wedding invitation with the couple's caricature in the cover. If you had sat beside me on the bus, you would have noticed that I intermittently looked at the address, complete with the exact latitude and longitude (Luther's suggestion, I'm sure), lest I get lost. I knew it was going to be held at Sonya's Garden, a beautiful events place that serves flowers for salad. The dressing, I would later discover, would be heavenly.The wedding was to start after lunch. It was almost 11:30 AM. My friends, especially the ones who brought their cars, were already there.

When I arrived Luther had already serenaded Mau, a rare jewel of history that wasn't even captured on amateur video. But my friends told me it was beautiful—I forget what the song was—and the emotional, romantic people in the audience were left teary-eyed, thinking, "They're so perfect for each other." They are. Thankfully my absence in the entourage wasn't noticeable. They dragged an Iranian guest to stand in my place—there was no way we looked similar, but he was wearing a polo barong. From afar, we couldn't have been that different.

The ceremony was serious yet joyful, the way only Christian wedding ceremonies can be. There was a lot of singing as well. God's family, the local church, celebrates the union of man and wife and will hold the couple accountable to their promises to God. In the months that led to the wedding day, I saw how Luther and Mau determined that the occasion should ultimately redound to the honor of God's name. They were explicit in their intention to make it a gospel opportunity for the guests who may not know Christ personally yet.

I've known Luther for a decade now—our rooms were facing each other at Kalaayan Hall's basement, usually jam-packed with dorm mates who came to him for math tutorials—and he wouldn't stand for too much formality. There was jesting, mostly by Luther, one of the best in the humor department—reserved yet hilarious, almost like an Englishman. His vows brought tears to our eyes. He promised that he would love Mau sacrifically and unconditionally, as Christ has loved the church.

Mau's allergies were already under control, thanks to her daily doses of antihistamines, and she looked radiant as ever, like she was born for that moment. Yet she couldn't keep herself from crying. Her words stood out when she said she would always respect her husband and be a delight to him.

I had the privilege of hosting the wedding after-party with no less than emcee-extraordinaire Sara Balbuena-Gonzales who just had the right words for the exact moments and who never seemed to lose them. Thanks to her, we were able to alternate between eating and hosting.

Yesterday, Luther and Mau visited the Matulungin apartment. It was the first time I had seen them since the wedding. We had a lot of catching up to do. I learned that both of them have gotten domesticated. After work, they would cook dinner for themselves and sleep early. They could hardly recall the last time they'd eaten out.

In a sense, marriage changes people. I will visit their Cavite home soon. Mau promised she'd cook for me.
christianity family + friends photography