The fake graduation that felt real and fun

April 26, 2014
I WAS contemplating on whether I should attend the University Graduation or not. My main argument against it: that it wasn't a real graduation, in the sense that we still had to report to the hospital at 6 PM, that we weren't finished with our academic and clinical requirements yet, that we had end-of-the-year exams to prepare for (not that I'm losing sleep over them—far from it, actually). 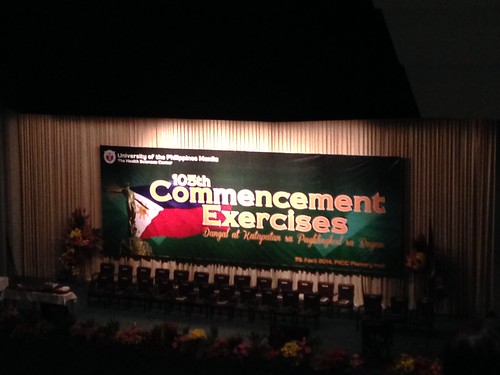 But my father insisted on flying over to Manila. He was so excited he immediately booked his plane tickets. This was, after all, the first time that someone in our immediate family would be graduating as a physician. My mother and younger brother Sean are both addressed as "doctors," but they're dentists. I also figured that attending the Univ Grad would be a dress rehearsal of sorts, in preparation for the real College of Medicine graduation on May 19.

Even if it was all a show, I truly enjoyed the ceremony. Everyone in the class did. The pervading feeling was celebratory—and rightly so. We were out of our PGH posts legitimately, and we felt that a major chapter in our lives was finally ending. Needless to say some classmates couldn't resist falling asleep, having just emerged from 24-hour shifts.

Minutes before the processional we were all intoxicated with the idea of taking pictures of ourselves in our green togas. We looked smart and dignified, with our neckties and cocktail dresses and black shoes and stilettos.

It was in the spirit of documenting every moment, regardless of its insignificance, that we earned the title, The Noisiest Bunch. We may deny this categorically, but we are of the Selfie Generation, with smart phones and all. Hardly half of us availed of professional photography services. I could only count classmates who brought real cameras. We were the last to enter the hall. We were taking batch pictures of ourselves in various groupings we could think of—our first year research group, our second year block, our third year block, our third year sub-block, and so much more. It was exhilarating, we broke into a sweat, but nobody really cared. 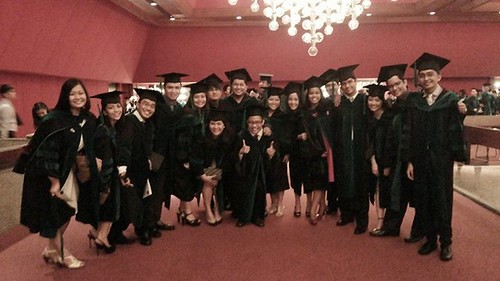 My ICC (Third Year) block: Saluyot, in remembrance of our award-winning ant-ulcer finding that saluyot is protective against ulcer. In mice, at least. (Photo credit: Margie Bocaya) 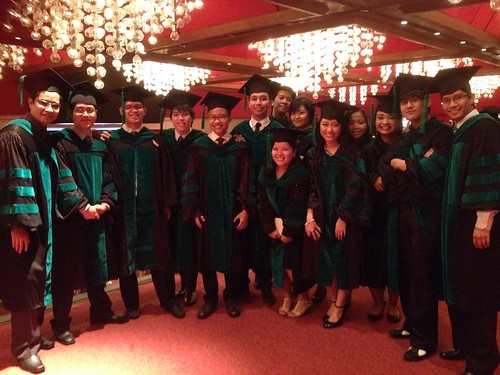 Cardinal Tagle's speech was simple yet captivating. I still laugh when I remember him saying to a post-modern girl who called him a fake, "Gusto ko siyang sakalin." Otherwise the ceremony was nothing extraordinary. Even the protest that disrupted the program was not surprising. 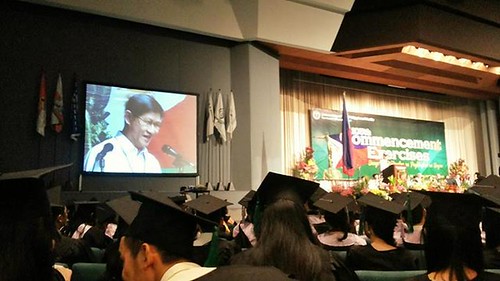 I have so many things to say about graduation, about the people I'm thankful for. For now, though, let me just share some photos from Manong's camera. I'm still waiting for Leeca Caro to email her shots to me, so I can share them here.

With Tatay at the Philippine International Convention Center. I insisted that he wear his dark-rimmed glasses all the time.

Breakfast and coffee at Harbor Square before the ceremony. When we saw the yachts, we thought: "Picture, picture!" 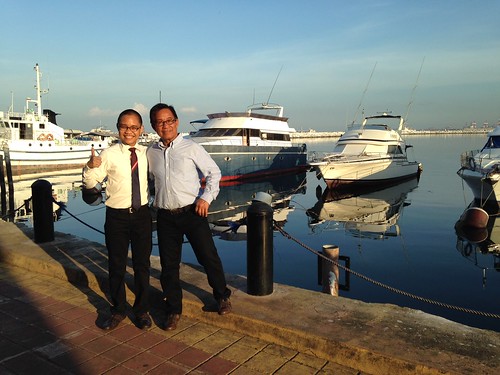 Asleep during my graduation. 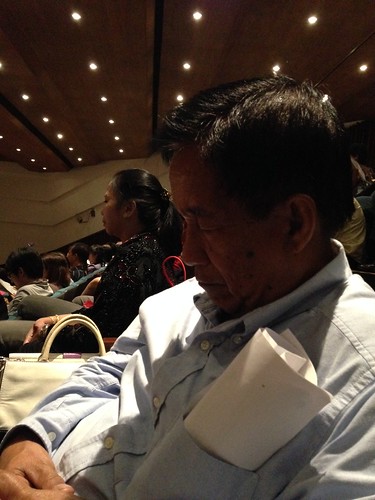 Manong dragged me out of the hall and made me pose in different places.

With fellow bookworm and melancholic Carlo de Guzman, one of my dearest friends in med school. Carlo, the red tie really looks good.

With Ching's family and my father. Her mother Tita Gloria frequents this blog—hello, Tita!

With Glaiza de Guzman who, when she met my father, asked him, "Saan na po si Tita Shirley?" She hasn't met my mother yet, but she knows her name. Too bad I hadn't had a photo with Tita Liberty, Glaiza's mother who makes the most delicious rellenong bangus.

With the Most Exalted Brother (or is that the proper title?) of the Mu Sigma Phi Fraternity, Joseph Brazal—also one of my close friends and lunch buddies.

I was happy with my choice of eyeglasses. People exclaimed in delight: "They really fit you, Lance." Manong Ralph couldn't have said it better: "My brother, Lance, graduates from Hogwarts, uhm, I mean, med school today." 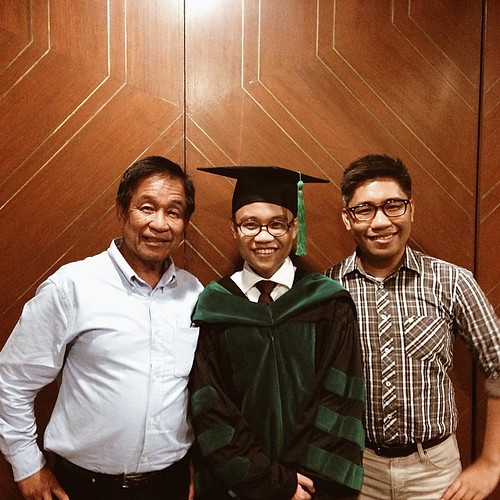