Remembering Gabriel Garcia Marquez, for nobody else in the world could write like him 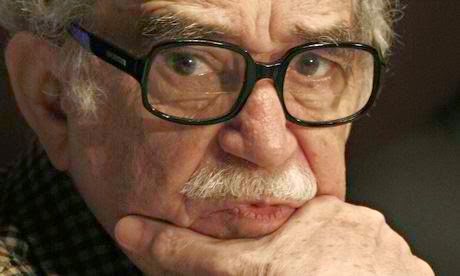 THE NEWS OF Gabriel Garcia Marquez's passing away didn't come as a shock to me. Old writers die eventually--that is a fact of life. But I was saddened by the news and was deeply affected by it, perhaps in ways that only avid readers can relate to. Nobody else in the world could write like him.

I first read GGM in 2004, the time when I was living at Kalayaan Hall (UP Diliman) and JP Asong, who still reads more books than I do, used to frequent my room at B17. I saw him reading One Hundred Years of Solitude. Intrigued, I borrowed it from him. I think it was a long weekend when I started on the novel. Fortunately I had no exams lined up. At the outset I found One Hundred Years tiresome and confusing--the sentences were long and winding, often spanning pages before the next period was in sight. Many of the characters were named Aureliano Buendia, so I had to refer to the family tree at the beginning to orient me on the timeline. But 20 pages into the book I was hooked. Before I knew it, supper was ready, and I was finished.

My brother Ralph, who owns a rich set of literary titles, shared his copies of Strange Pilgrims and Collected Stories with me. He bought those for less than a hundred pesos at one of our church's garage sale. The Incredible and Sad Tale of Innocent Erendira and Her Heartless Grandmother became an instant favorite.

His novel Love in the Time of Cholera was an eye-opener, in that it was a peculiar love story quite unlike the Danielle Steels I had read when I was 13. Because I had no money I read the entire novella No One Writes to the Colonel at the now non-existent Powerbooks at Robinsons Manila. The Autumn of the Patriach was particularly daunting, perhaps the most difficult book he had written. To this day I'm not sure if I had really understood the tragedy that comes with absolute power--or was that the point of the book?

Gabriel Garcia Marquez has left behind so many works. There's a sense in which I'm thankful that I haven't read all of them. I will embark on them soon, but the promise of adventure and magic that comes with those works does not erase the sorrow I feel for the loss of a truly great writer, someone who has changed the way I view the world and literature.