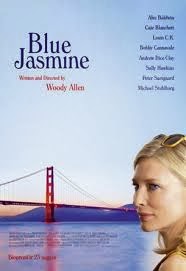 I WILL watch anything with Cate Blanchett on it, especially if it's a film directed by Woody Allen.

Blue Jasmine (2013) is about a former Manhattan socialite named Jasmine (Cate Blanchett), at the time in her life when she's just about to hit rock-bottom. Her husband was charged with, and later on incarcerated for, theft. He has stolen from the government and from other people to further his businesses—think Janet Napoles if you're from the Philippines. Her husband would later hang himself in prison.

And all these leave her with an empty, pointless life—for what could she do, apart from holding New York City's most awaited dinner parties or decorating her home or going to galas? She doesn't have any degree. Her stepson has left her. She is alone in a cruel and unforgiving world. Until, as we see in the first part of the movie, she moves in with her sister Ginger, who lives in a small apartment in San Francisco and waits tables in nearby diners.

Ginger (Sally Hawkins) is her antithesis. Whereas Jasmine has a taste for the rich and powerful, Ginger attracts blue-collared workers and drunks. Their adoptive parents used to prefer Jasmine when they were young. She was a straight-A student, whereas Ginger left home and pursued her own dreams. Ginger blames it all on the genes, but we know that life is, in a sense, a result of the moral decisions we take daily. So Ginger did make awful decisions in life—but who are we to say that Jasmine was better off compared to her?

We feel sympathy for Jasmine. We laugh at her troubles and how she deals with them—and this is why the movie is so hilarious. It is not the typical riches-to-rags story where the protagonist somehow finds a way to bring back the good ol' times. The movie ends with Jasmine seated on a bench, talking all by herself. After that scene we can only surmise that (1) her life has undergone the downward spiral to doom, or that (2) she has found a way to redeem herself somehow.

Jasmine is the classic case of a person who found his/her identity in something or someone else other that God. Take that thing away, and life becomes inevitably empty.

LISTEN to Cate Blanchett as she shares her experiences in working with Woody Allen. Her replies are substantial. I hope our local actors (especially the new ones) can speak with some sense, too.