September 27, 2013
WE HAD five consults today. The most severe was a 29-year old man who sustained electric burns on his face, trunk, arms, and legs, affecting at least 40% of his total body surface area (TBSA). Before we scrubbed the burn sites we gave him meds which partially relieved the pain, but he still squirmed and sobbed like a boy whose dog just died. We took more than an hour peeling, cleaning, and dressing his wounds. For the next few weeks he'll be at the Carwash on a daily basis.

After lunch an 88-year old lady came in a wheelchair. She looked 70 to me—a healthy geriatric. I'm a sucker for old people—second to neonates, they're my favorite people group. Because of her poor eyesight she kept referring to me as "doktora." She did not see the beginnings of my moustache. I lowered my voice and spoke in baritone, but the title remained. She called Bernie Cid "doktora." She called me "doktora." But she called Charlie Clarion "boy."

A month ago she was carrying a pail of boiled water. She slipped. The water scalded her back and butt.

"Doktora, huwag niyo po akong saktan," she said. We didn't scrape her flesh yet, but she screamed. Ordinarily we wouldn't have minded. We've learned the art of shutting our ears after three seconds, but we were afraid we could push her into a heart attack. Her second daughter, a paragon of love and patience, assured us, "Ganyan talaga siya, Dok. Hayaan niyo lang." The daughter was with her mother the entire time, massaging her head and arms. She made her mother feel comfortable. How inspiring.

The screaming continued. Half of it was anxiety-induced. We were only peeling the eschar, after all, which was insensate. Lola wanted it to be over, praying loudly as we went along: "Diyos na makapangyarihan, tama na po ang sakit na ito. Kunin niyo na po ako! Ipinauubaya ko na po ang buhay ko sa inyo." To our mind: Her Seven Last Words.

At the end of it all she thanked us. "Salamat sa inyo, mga doktora. Pagpalain nawa kayo ng Maykapal."

At 3PM we were done for the day. We stayed at the nursing aides' lounge, our favorite spot at the Burn Unit. The TV and the electric fan reminded us of home. We watched Pridyider starring Andi Eigenmann on ABS-CBN. 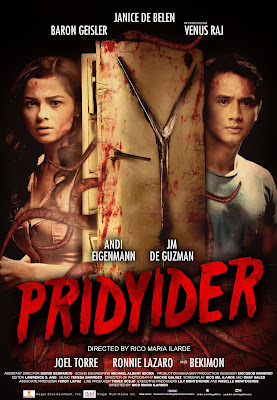 When was the last time I had watched TV?

The movie surprised us: a refrigerator swallowed full-grown people. We all wondered how they fit inside. As we correctly predicted the refrigerator was cursed, and the cure shocked us: "isang banal na bomba." In English, a holy bomb. We officially liked the film.