February 09, 2016
THE CLOSEST thing I’ve come to being Chinese is to have been mistaken by rowdy Filipino OFWs as Chinese; this, while buying fruit juice at Schipol, on my way back to Manila to catch my Nephrology exam. They were taunting a guy named Noy, who kept a mistress in Surigao, unbeknownst to his wife in Iloilo. I understood a joke I no longer remember, chuckled in amusement, at which point they looked at me and said, “Pinoy ka pala.” The gang, who I later learned were seamen working for a Norweigan vessel company, forced Noy to share his chocolates with me. “Huwag kang madamot. Bigyan mo naman si Doc!”

Yesterday, despite the lack of immediate Chinese heritage in my blood, I celebrated the Chinese New Year. I did away with wearing red, inasmuch as I’ve done away with many things I don’t believe in, but I enjoyed the pleasures it entailed: more time away from the hospital. 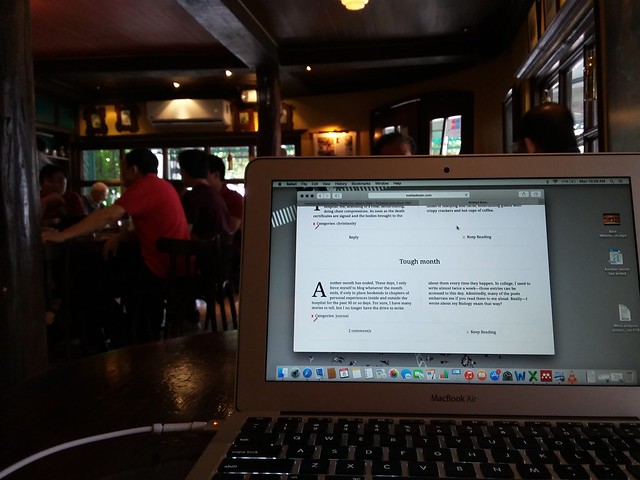 I spent the morning at Café Adriatico where I ordered my second cup of coffee plus pan de sal with kesong puti on the side. The kesong puti was nowhere near as good as the one my friend (Ch)Everly Ramos brought from Laguna. The coffee, however, was great, though I never quite got the same satisfaction as I do when I have the brewed coffee at Midtown Diner—still, for me, the best coffee in town. I wrote some emails, finished tasks for the church website, and worked on my researches. It was 2 pm when I felt sleepy, so I decided to get back to my room for an afternoon nap. Bored, I decided to take an Uber to Quezon City, where my two brothers and some friends now live.

The night was cold, so my brother Ralph and I did some walking. Maginhawa Street, which used to look a lot like Koronadal, was busy with night-life, with hipster-looking college students in shorts, backpacks, and black, thick-rimmed glasses. Where to eat was always a problem. I wanted chicken wings for the feel of it, but the go-to place we used to frequent was closed. “Where do you want to go?” Manong asked. I shrugged my shoulders. Too bad Sean was still at the clinic; he’s working part-time as an oral surgeon-dentist.

“Sige, let’s walk. We’ll think of something,” was Manong’s invitation. Heck, I had nothing much to do—or at least, I was merely postponing them. We found ourselves in quiet residential streets where sleepy dogs hung around, lazily guarding closed gates of houses with ambient yellow lights. There were no crickets, but it felt provincial. I ached for home.

“Look,” said Manong, as he pointed at the cramped apartment where we used to live [1], very near the barbecue place that sold cheap food so delicious we always ordered for extra rice servings.

I didn’t want cupcakes or coffee or pasta—just plain Filipino food. We spotted Rodic’s in a corner, very near a noisy neighborbood. It was a typical non-airconditioned carinderia: plastic chairs and tables, still with remnants of oil from the tapsilog and sisig ordered by their loyal customers. I ordered tapsilog, with the egg well-done. Before I launched on my gastronomic attack, I smothered my plate with a generous shower of vinegar. My brother and I were both filled.

I spent the night at the apartment, then I left early so I could do my morning rounds without the hassle of grabbing charts from other people. My patients, most of them intubated, were all quietly sleeping—their own, limited way of celebrating the Chinese New Year.

[1] This post shows photos taken from inside that apartment, when Manong was still a law-student, and Kuya John was still in the Philippines.
journal