February 21, 2016
LAST NIGHT was a riot. I had to hold back sleep over dinner because it's not every day that I meet my good friends, Paul Velasco, who now lives in New Zealand, and Jeiel Guarino, who gave me one of my favorite books to this day, Jerry Bridges's Trusting God. Manong Ralph also tagged along. Basté Julian also dropped by. He spotted us from the outside; he was walking, holding hands, with his girlfriend. 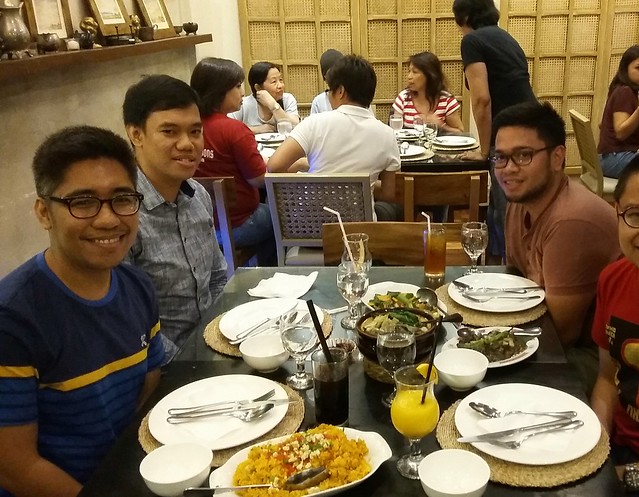 It's funny how, after six years of not meeting together, save for the occasional emails we send each other during the downtimes our lives, we still laugh at the same things, usually at the same time. Paul still calls me "contemptuous," a word I haven't heard in a long time and one that makes me feel nostalgic. I remember raiding his room at Yakal's East Wing 2, where I was greeted by fresh underwear hanging to dry; they smelled of Downy. I'd also take over his writing assignments, shooing him from his desk, and taking his laptop—"Let's include this paragraph," I'd say; and Paul would get worried, thinking his professor wouldn't believe he'd written the piece. Oh, I've missed him. He has lived in New Zealand since graduation and goes crabbing once in a while.

I asked Paul if he knew about Hokitika, a place alluded to in the Eleanor Catton novel, The Luminaries. He heard about it, then he mentioned a few exotic-sounding names.

Jeiel celebrates his birthday today, and I didn't remember that until Manong told me, after checking Facebook. An expert in environmental science, Jeiel's work involves removing lead out of paints and gasoline, and making sure legislation and policies geared towards that end are supported.

After dinner, we had coffee and churros. Jeiel, who travels a lot and who has been to Spain, says he has tasted the real thing. Coffee was good but not enough to sustain me. I entertained them with stories of the hospital. They said I looked tired, and my eyes were smaller. Dinner ended at 9 PM.

When will I see them again? I don't know. Hopefully soon, hopefully in the next five years.
family + friends