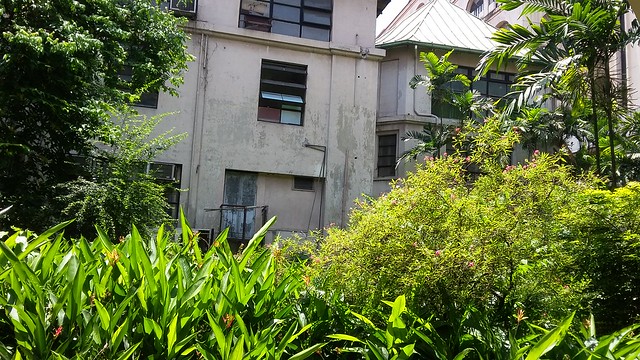 Garden in front on Ward 3, taken on a lazy Sunday morning.

NOTHING reminds me more of The End of First Year Residency than the prospect of seeing new faces applying for one of the 21 coveted slots in our training program. This limbo, called the “pre-residency,” is the worst of two worlds—the newly-inducted physician doesn't quite know whether he should celebrate his recent victory in the Boards or whether he should study again (as if studying ever ends in our line of work) to prepare. I do not want to go through it all over again. I will call a masochist anyone who claims otherwise. There is a reason why pre-residency is proverbially called The Hunger Games.

If you are applying for a slot in Internal Medicine at the Philippine General Hospital, I want to tell you that there are no sure ways of knowing whether you will make it or not. Speculation, like worrying, is futile. Your co-applicants are probably top-ranking graduates of their own medical schools. Some may have even topped the Boards. But don’t you worry if you feel average, mediocre, unexceptional. The fact that you do means you are open to learning; and it is this openness—this thirst for being trained—that will distinguish you from the rest of them.

There are no tips to ace-ing the residency application process. Even my colleagues and I don’t know how we got through, except that it happened by the grace of God.

What we know is that we woke up extraordinarily early like never before. We wanted to be at the Wards before sunrise, before our residents emerged out of their REM sleep. Because I’d already given up my Taft Avenue apartment after med school, I had nowhere else to stay but my brother’s place in Quezon City, roughly an hour of cab ride away, even in the best of Manila traffic. I’d wake up at 2 in the morning. That meant I was already at the Ward, poring over the charts, pretending I knew what I was doing, by 3 AM.

Charting is the major activity of pre-residency. What you write in the chart reflects your thought process. What is not written has not happened or has not been thought of. The initial reaction is intimidation, followed by fear, then cluelessness, then . . . sheer bravery. After all, you must write something to get it over with.

Go through the charts slowly. It helps to know the primary working impression first. After that, go over the medication chart; that should give you an idea of what the patient is getting. If he is on aspirin, clopidogrel, and metoprolol; you are probably dealing with a patient with myocardial infarction. Check the monitoring sheets. Check the I and O. Get a thorough history and examine the patient carefully. There are no shortcuts to this—the only way of doing it more quickly is by doing it more regularly.

Always be at your best, but do not pretend like you’re someone else. Be kind, responsible, respectful, easy (and fun) to work with. Befriend your co-applicants. They will probably whisper the right answers to you during Guazon Hall endorsements. Always eat a hearty breakfast; a cup of coffee can be life-changing.

Pre-residency wasn’t easy, yet it brought me closer to the Lord. My personal journals were filled with supplications of all kinds. I felt I did not know a lot; He gave me wisdom. Many times I felt discouraged; His promises lifted my spirits. I came to the end of myself, and it was only by sheer surrender that I found peace, knowing He wills the best for me.

I emerged out of pre-residency more convinced that Internal Medicine was for me. I hope, whether you make it or not in the end, that you will feel the same way, too. God bless you. The future looks bright. The world is your oyster.
journal medicine photography