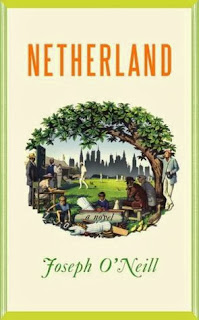 NETHERLAND is about a Dutch banker in post-September 11 Manhattan. His name is Hans van de Broek, a successful Wall Street analyst whose English wife had left him for London. She took their son with her. He visits London occasionally—he expects for the marriage to work, but it's on the verge of falling apart. Why all this is happening to him is something he grapples with every day. His solitude is so palpable it spills over the pages.

One day he meets Chuck Ramkissoon, an interesting figure who becomes his closest friend. Born in Trinidad, he migrates to America to find himself a better life. Critics call him a Gatsby figure; I call him a rags-to-riches story. He seems to know everything—a visionary who wants to introduce cricket to the American bloodstream, believing that the sport will unite all. Hans hardly shares this vision, but goes along with Chuck, playing cricket matches with Pakistanis and Indians. Hans, the only white person in the cricket club, doesn't mind it at all. Friendship knows no race.

Now I cannot explain to you how much I enjoyed this book, but I'd like for you to read it if you have time.

Maybe it's the Dutch connection, the Netherlands being the first European country I had visited. I could picture Hans' childhood at The Hague, riding bicycles with his mother on a cold, gloomy, cloudy day; seeing the windmills and canals. He even went to Leiden University for college—that was where I had presented a research paper on H1N1.

Or maybe it's my dream of visiting New York City, walking on its streets, riding its subways, and feeling like the smallest fish in a vast ocean.

Like Hans, I love the feeling of living in a place where nobody knows you and you don't know anybody. There is that promise of escape, of starting life anew, and of leaving behind your worries and your past. In the end, though, you will crave for home. Life is all about coming home. And I'm glad that in the end, Hans has come home to his.