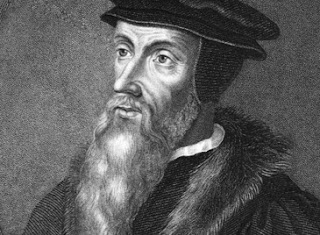 John Calvin’s The Institutes now occupies a special part of my reading life. I’m now on Book II, entitled, “On the Knowledge of God The Redeemer In Christ, Which Was Revealed First To The Fathers Under The Law, And Since To Us In The Gospel.” Here he argues for the complete and total depravity of man, the doctrine that states that man is evil, by nature and by choice, and is therefore destined for eternal destruction. This goes against the prevailing notion that something good dwells in man, so he can earn his salvation anyway—a falsehood that Calvin, using Scripture, so eloquently and comprehensively refutes.

“These two things therefore should be so distinctly observed; first, that our nature being so totally vitiated and depraved, we are, on account of this very corruption, considered as convicted and justly condemned in the sight of God, to whom nothing is acceptable but righteousness, innocence and purity.”--Book II, Chapter I, VIII

“For our nature is not only destitute of all good, but is so fertile in all evils that it cannot remain inactive.”-- Book II, Chapter I, X


“For man has not only been ensnared by the inferior appetites, but abominable impiety has seized the very citadel of his mind, and pride has penetrated into the inermost recesses of his heart; so that it is weak and foolish to restrict the corruption which has proceeded thence, to what are called the sensual affections, or to call it an incentive which allures, excites, and attracts to sin, only what they style the sensual part.”--Book II, Chapter I, IX


“… He who feels the most consternation, from a consciousness of his own calamity, poverty, nakedness, and ignominy, has made the greatest proficiency in the knowledge of himself.”-- Chapter II, X.