A dog on a leash—and some random thoughts

July 01, 2013
JOYCE Carol Oates' Mastiff is published at The New Yorker this month and can be accessed for free. The short is about a man and a woman who go hiking, encountering a dangerous dog on a leash along the way. Both past their thirties, they wonder whether they're meant for each other. Although it is a love story, I enjoyed it very much. My favorite passage:

The man was a little annoyed by the woman. Yet he was drawn to her. He hoped to like her more than he did—he hoped to adore her. He had been very lonely for too long and had come to bitterly resent the solitude of his life.

Very powerful statements. Do you have an Oates novel you like to recommend?

Now that we're on the subject of dogs, here are a few things I'd like to share:

— I got bitten by a dog thrice, which explains my behavior of going to the other side of the street when I encounter one of their kind.

— My father got a bulldog a week ago, a gift from a friend. Tatay described the new dog as fierce and hysterical, two qualities I fear. Surprisingly it was my mother, the dog hater, who named him Timmy, after Tim Duncan of the Spurs. Had I been consulted I would've named the canine Matthew or Pickwick.

— We've always had dogs in the family: Eve, Rocky, Rocky I, Vannie, David, Jill, and Benjamin are the dog names I remember. I miss David most of all.

— I like dogs that don't bite and bark. My favorite is the chow chow owned by my brother's neighbors in Matulungin Street. Furry and golden like a lion, the fat dog always looks stuporous, spending the afternoons under the shade, occasionally opening his eye when there are passersby. He has never barked at me, a behavior I interpret as friendliness. I've taken a strong liking to him. He looks like this. 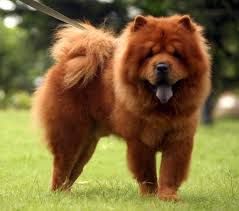