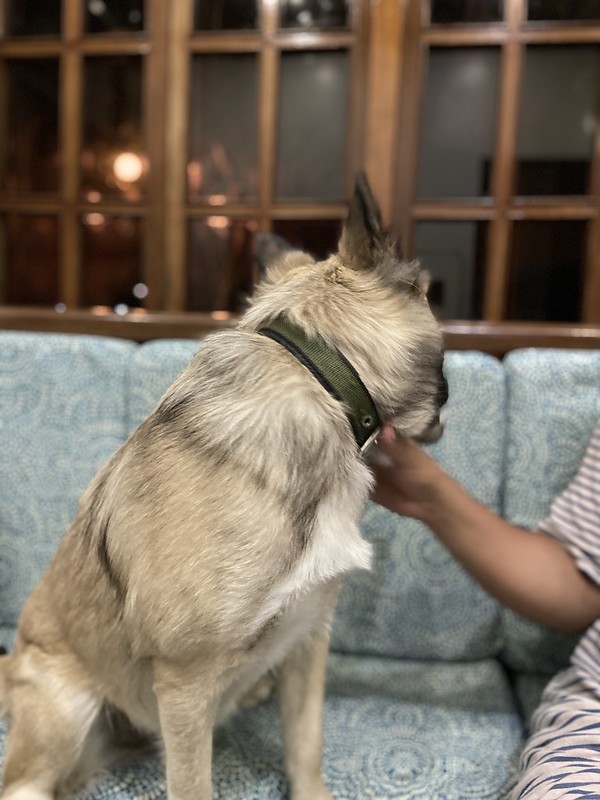 On the night of his first year with us, Paul resumed his open-pit mining activities in mother's garden. When we woke up the next day, we saw the horrific devastation to my mother's treasured flora. One would think he was digging to reach the earth's core.
"Hala ka, Paul," we told him.
"Wala abi siguro siya na-walking" was the prevailing theory. Because it had been raining that afternoon, he missed his routine with Auntie Nanic, who walks him around. Their ritual includes several rounds in the morning and a few more in the afternoon. They go as far as the plaza, where Paul greets his canine friend Vlad. He likes chasing frogs in the vacant lots and prefers to relieve himself by the garden of a community doctor. One morning, when nobody was looking, Paul had defecated there. The home's caretaker, who saw the deed, reprimanded them. Auntie Nanic's face must have turned red in embarrassment, and she apologized profusely. Paul looked ambivalent, avoiding eye contact, as if he heard nothing. She now gets into a state of panic the moment Paul exhibits preliminary signs of pamus-on and brings him to another less well-tended garden with wilder growths of grass and cosmos, and where the homeowners wake up late and perhaps appreciate the organic fertilizer Paul provides.
Nobody knows when Paul's actual birthday is. On November 17, around this time last year, just as we were preparing for a beach trip with church members, Auntie Net and Uncle Glenn brought us a package: an innocent, anxious, quiet brown puppy wrapped in a small towel. He was a gift from their neighbors in Gensan.
When we first brought Paul to the clinic, the vet took an immediate liking to him. She estimated that Paul was at least one or two months old. His actual birthday could then be sometime in September or October.
What used to be a quiet, ambivalent puppy is now a loud, extroverted dog. He wants to be let in private conversations. He leaves food for his frog friends, especially on rainy days. He is quieted by human contact. On Zoom meetings, I put my feet on his belly to put him to sleep.
Paul can both be irritating and adorable all the same. But he has brought joy and comfort to our home. Mother's plants—those that survive to this day—will say otherwise.
daily koronadal