The rain began to leak into my soul

May 21, 2022
As I return to Paul Theroux's Riding the Iron Rooster on this cool Saturday morning, the feeling of calm-after-the-storm descends upon me. After a tiring week of my kind and gracious grandmother's passing away, I can go about my day without anything urgent floating in the air. I want to tell you more about Lola Ugól, of course. I can start with the story of why nobody—not even her children—knows why she was called Ugól when her real name was Trinidad Zamora Garcenila. But not today. Of course, there are patients to see and faculty work to be done, but those can wait until 10 am.
For now, I want to savor this moment: the possibilities of a weekend. A quiet morning in the porch, the vanilla-smell of old book pages, the exquisite gray strokes of my Blackwing Palomino, the minimalistic design and engineering of my MacBook Air. These small things and habits allow me to both dwell on and forget about grief. The running joke in the family is that May is a particularly harrowing time of the year: it is when deaths and birthdays happen.
Escape is not quite the word for what I want to do today. Perhaps, adventure might be appropriate. For the vicarious opportunity to travel distant lands, I am grateful for books, such as the one I'm holding.  In this memorable paragraph which appears in the chapter, The Shandong Express to Shanghai (p. 400), Paul Theroux writes about the pleasures of anonymity in a foreign land. 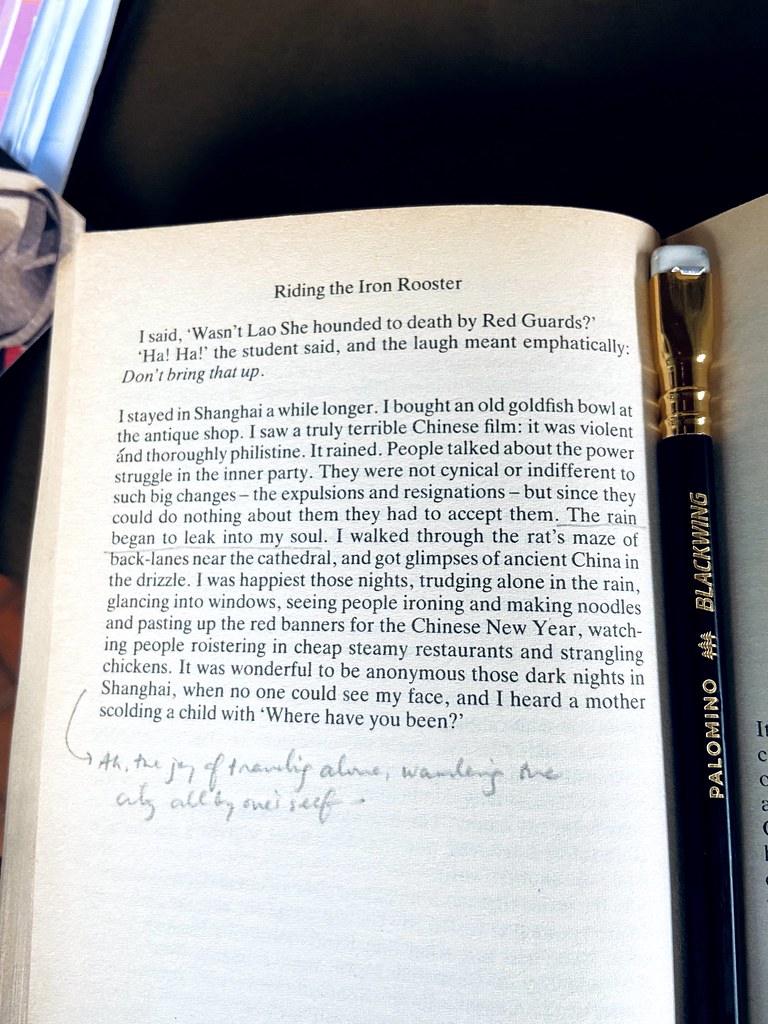 I stayed in Shanghai a while longer. I bought an old goldfish bowl at the antique shop. I saw a truly terrible Chinese film: it was violent and thoroughly philistine. It rained. People talked about the power struggle in the inner party. They were not cynical or indifferent to such big changes—the expulsions and resignations—but since they could do nothing about them they had to accept them. The rain began to leak into my soul. I walked through the rat's maze of back-lanes near the cathedral, and got glimpses of ancient China in the drizzle. I was happiest those nights, trudging alone in the rain, glancing into windows, seeing people ironing and making noodles and pasting up the red banners for the Chinese New Year, watching people roistering in cheap steamy restaurants and strangling chickens. It was wonderful to be anonymous those dark nights in Shanghai, when no one could see my face, and I heard a mother scolding a child with 'Where have you been?'

More than sight-seeing, I like snooping around best in places where nobody recognizes me. Fulfilling this curiosity with a heightened sense of observation and note-taking amplifies the joy of travel; it also helps one forget, but also, eventually, remember.