May 27, 2016
IT WAS as if nobody cared. Nobody—except for a few people who had the patience to read the intermittent barrage of group SMS's—really knew where we were going. "Sa Batangas?"

The date was sealed nevertheless—we were going out of town, somewhere far from the city, with the hope of being able to catch up on sleep as well as with each other. As if, given the daily hilarious lunchtime conversations we have at the callroom, we needed catching up at all.

But sleep we did. Inside the coaster, driven by an old, gracious man who was too careful that we should not figure into any accident, we were lulled to sleep. What were we dreaming of? Definitely not the last minute SAPOD referral for a fake emergency case, or the mechanically ventilated patient at the ICU whose diagnosis we weren't too sure of. Maybe we were thinking of the beach and the sand and what awaited us after the road trip. 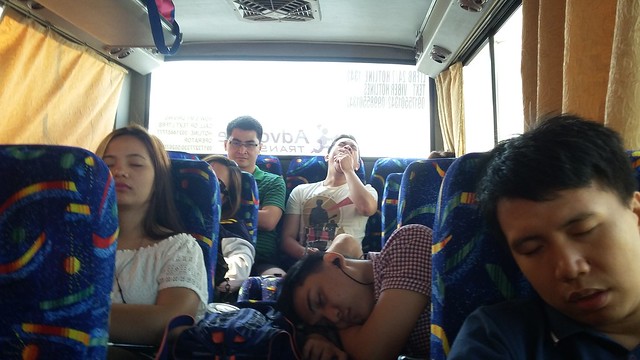 Famished and having taking stuporous naps, everyone was giddy to get breakfast. The Mondragon couple—just married and in the process, I hope, of producing adorable children—sat on the same row where I was. 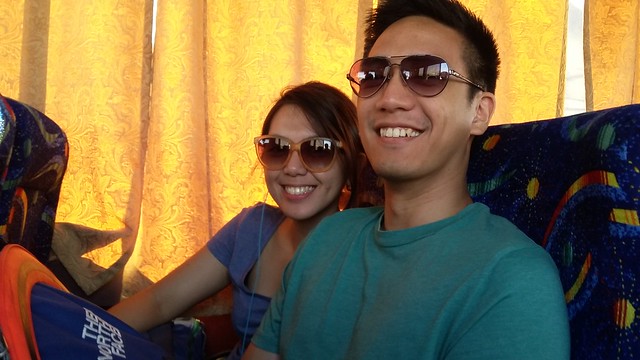 Ulysses Gopez, the coolest dude (I use this term sparingly, reserved for someone who brings a skateboard and a humongous speaker) in my year, was beside Bea Uy, arguably the most gracious of us all. 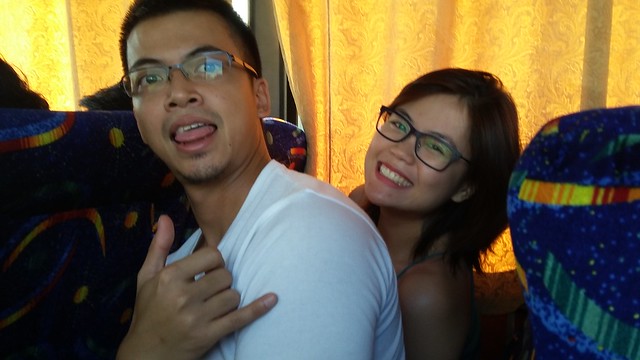 Just behind me was Jo Velasquez, awarded as this year's Most Outstanding Resident, for her dedication, skill, passion, and blonde hair. 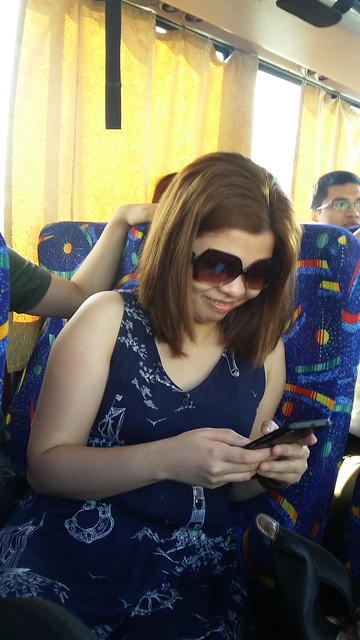 Traffic wasn't too bad. We had a comfortable stop-over at a fast-food chain along North Luzon Expressway. 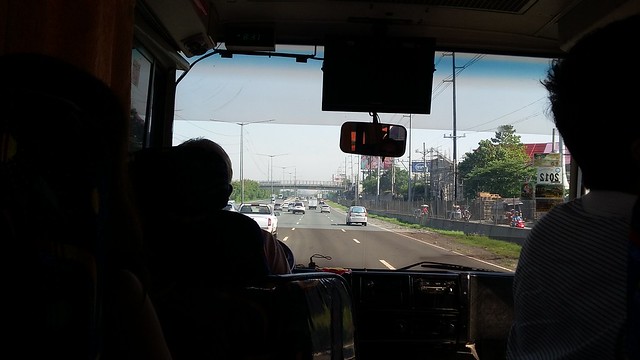 Mervyn Leones was with the Francisco family, volunteering as a manny. Mohan, the youngest in our group, could barely even pronounce his vowels, and was easily distracted by whatever was playing on the iPad. "You should start him on books," I told David, who told me his son was into those kinds of things. The kid had a keen interest on the alphabet. I said, "David, come to me for advice for his literary diet." 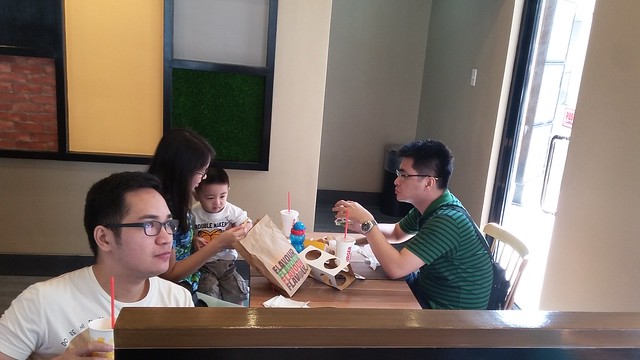 For others, eating was serious business. 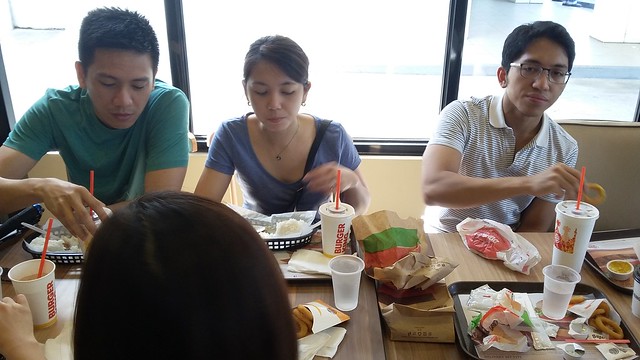 What was Danes Guevara looking at? We did not know, but it was enough to make Jay Magbojos's hair fall apart. 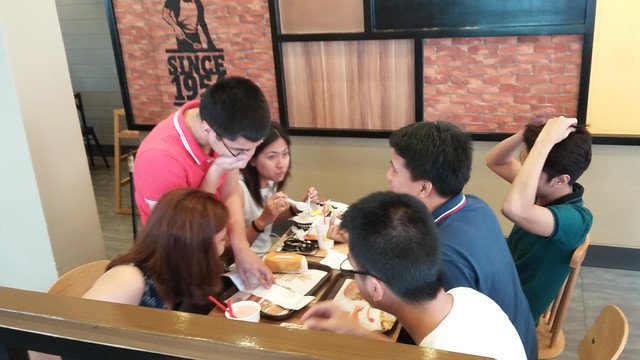 Satiated with our American-style breakfast, we headed to Zambales. Not that it matters, but it was the first time I had ever set foot on this part of the country. This, considering that my former roommate Bryan lives here, and I had been invited many times to stay over. The trees were green, the air clean—it made me wonder how I managed to survive Manila. 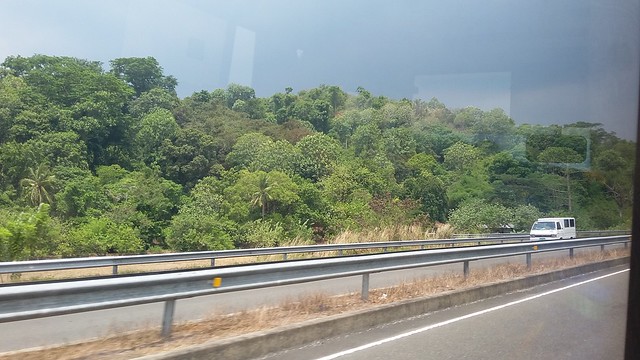 Subic was home to the American military base, so it didn't come as a surprise that everything seemed American—even the restaurant where we had lunch, which served back ribs dipped in that mouth-watering sweet-sour brown sauce. 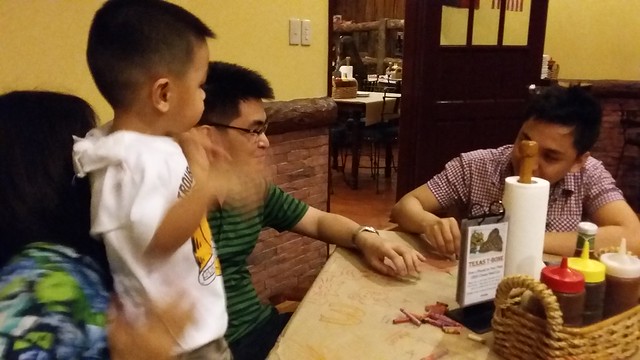 The drive was leisurely along the city, and we had reached our destination before we knew it. Inside the bus was laughing and crying out loud and jesting—the very things we do in the hospital when we're together.

In the age of photographic documentation, the trip was never complete without group pictures. Here were Karen Flores ("Payfloor" to most of us, "Payfloat" to me, for reasons I shall not enumerate), Everly Ramos, Laya Zamora, Racquel Bruno, and Abby Ortal—also known as the Powerful Women in White. 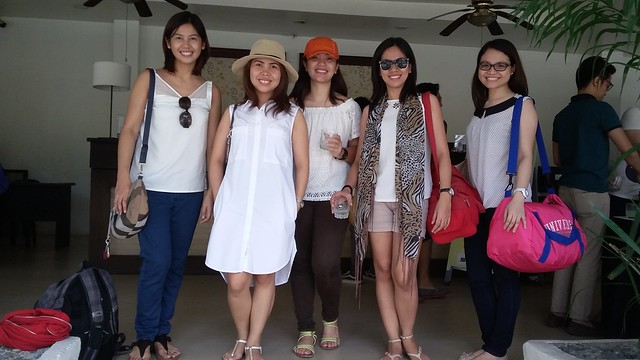 The Francisco family were in full force, too: David and the gracious Michelle, and Mohan, who got David's mannerism of wrinkling his eyebrows when he isn't convinced. 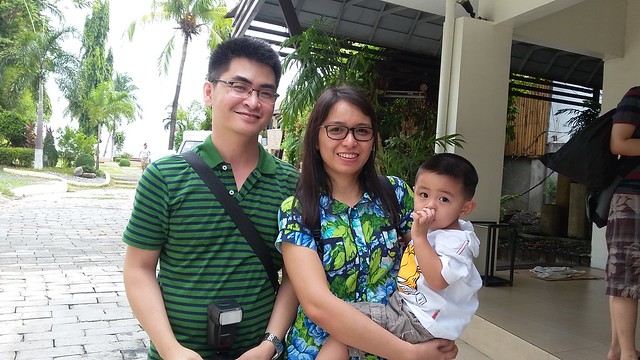 Here were my friends from Team B—the people with whom I share practically the same schedule at the Outpatient Clinic. 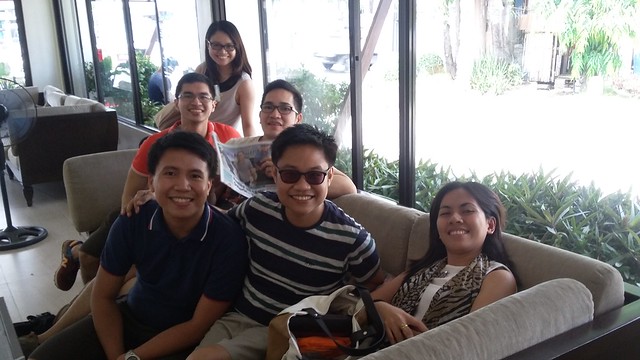 And look: a proposal! Ulz Gopez proposed to Mu Girl Payfloor, and everyone seemed happy, except Carla Barbon, who looked smug and irked. 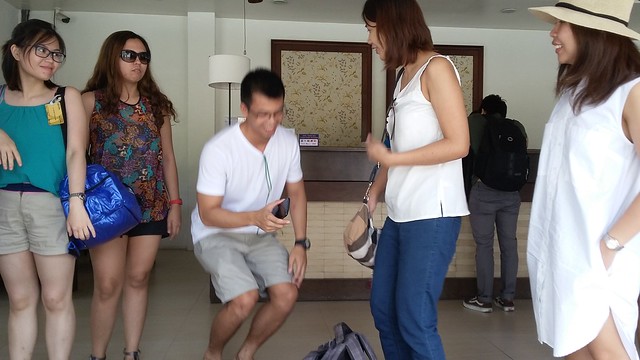 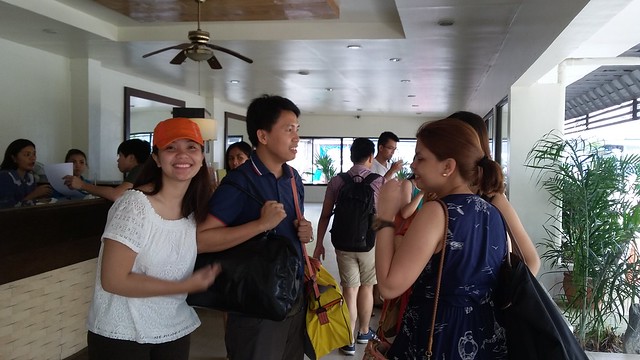 The trip was well worth it. I couldn't remember the last time I'd been to the beach—was it that long ago? 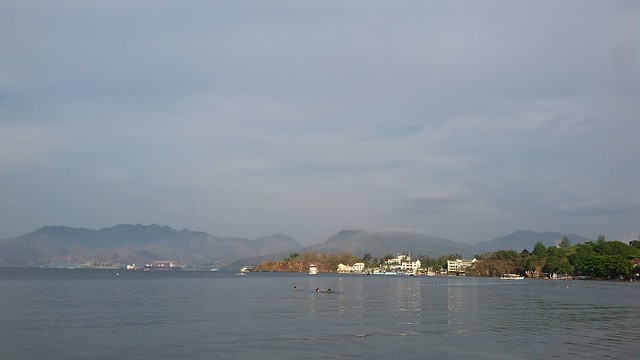 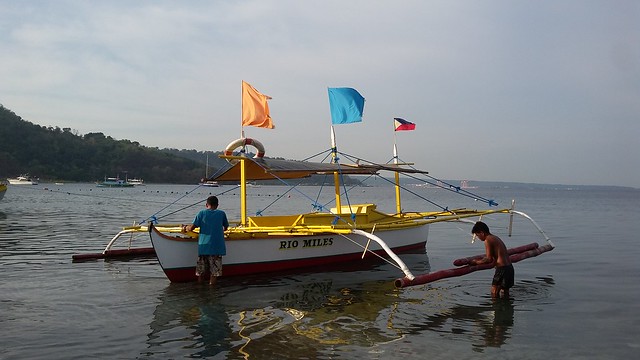 Just a few minutes away from the resort was this cemetery. 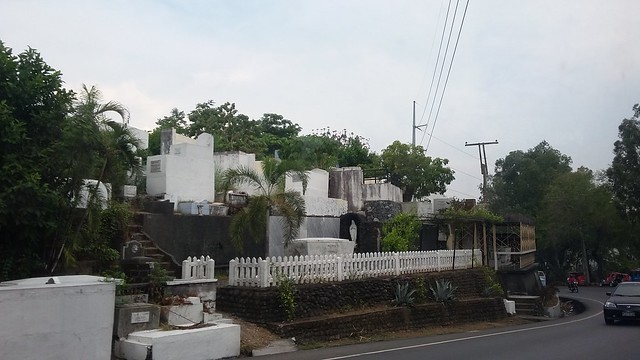 But we were here to enjoy. We've seen enough deaths in the hospital lately. 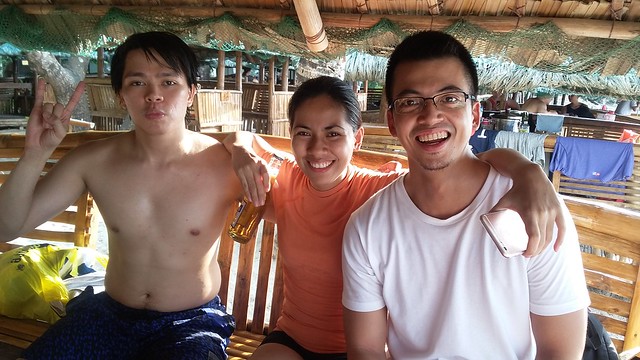 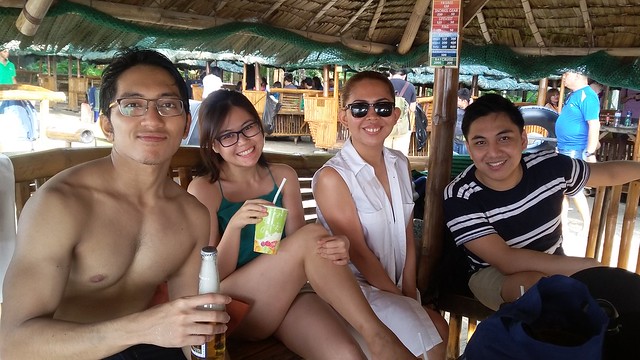 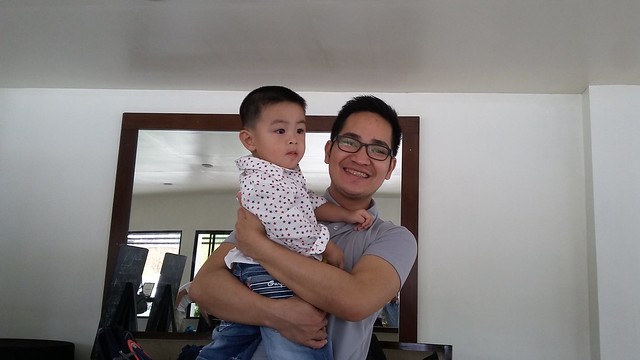 Many things happened in the night. We had a good dinner at a local hotel, followed by dessert at a fun place that served drinks with unlimited whipped cream. Our blood bursting with glucose, most of us slept as soon as we got back to our hotel.

In the morning I worked on a presentation—morning coffee, the sticky sea breeze, and a good serving of tapa dipped in vinegar. Praise God! 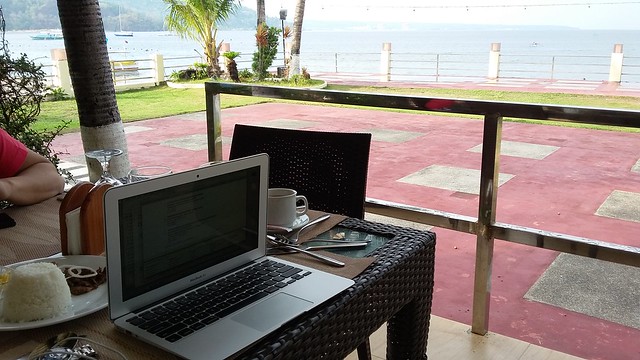 But the day had to end, and there was a hospital to return to. Colleagues who were on duty that day (they were to resume their posts at 5 PM) were dreading the moment of returning to reality—a moment delayed by the news that one of the coaster's tires just burst.

These were my friends' priceless reactions. 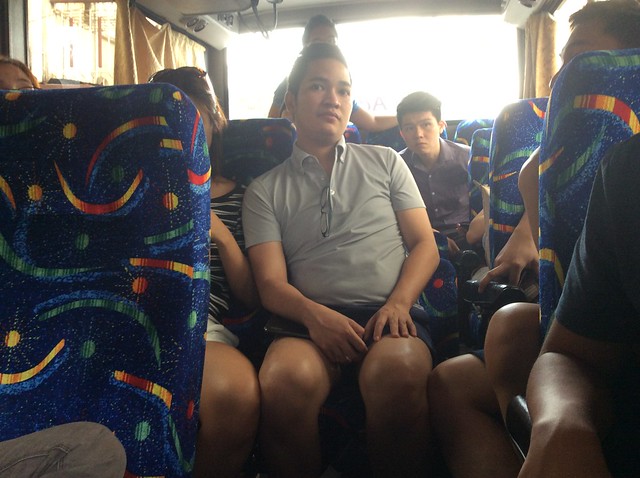 We had a side trip to a vulcanizing shop in Bulacan, but the entire process of looking for a mechanic and a functional tire would take longer than an actual commute back to PGH. The Duty Team decided to ride a jeepney. 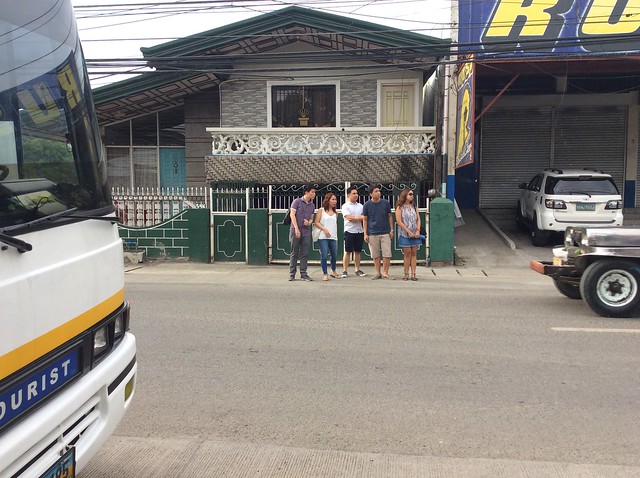 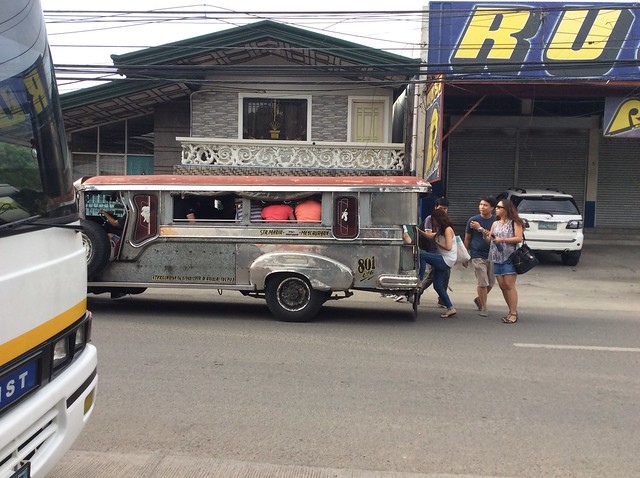 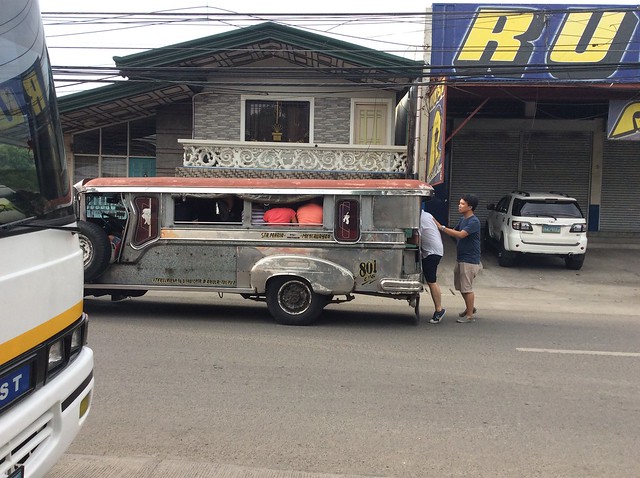 And we're all back. What a day. Thanks be to God for the safety, the fun, and the gift of friends.
adventure