No man is an island

February 19, 2015
ONE OF the greatest joys of my week, assuming I'm not on a 24-hour shift, is the Bible study (or cell) group I've been attending for months now. It's called Pilgrims, composed mostly of married, basketball-loving, middle-aged men. In terms of age, I'm in the minority—at 27, I'm among the youngest. We meet Thursday nights in church.

I derive so many encouragements, lessons, rebukes, and reminders from such godly, mature Christian men. And as someone who has just finished schooling and started working, I stand to benefit from the arrangement: they're already leaders of their families; they've been working for more than ten years; they've been through more things in life than I have. Experience, after all, is still the best teacher.

Although wives and children aren't my concerns for the time being, I've learned that the family life is an area actively used by God to gradually transform men into more Christ-likeness. It amazes me how married life has unique struggles, fulfillments, and joys—something a single man like me only knows in theory.

I relish the preaching of God's Word in our Bible studies. Classic scriptural passages I've committed into memory become real truths lived out in the every day; with their testimonies, these short Christianisms take on practical meanings. Consider Kuya Gerry's sharing tonight, largely based on 1 Peter 1: 6-9.* They speak of God in the most personal, intimate, and reverential way. They pray with faith. They speak with grace and kindness.

The cell group, and in fact, the Church, has been a huge blessing¸ especially to someone like me whose life most days of the week revolves around the hospital (where I practically live, because I'm a first-year resident, right?) Whenever I visit, it is as if I'm transported back to the real world—the proverbial “outside”—with its own concerns, worries, and joys. As a Christian, I need the fellowship to keep me on track. God designed it that way: that no believer should grow alone. Maturing on one's own is rather unheard of Christian contexts.

Of course there's always food and laughter and sharing time on Thursdays. And basketball, too—something I've been doing a bit of research on. I started with James Naismith. 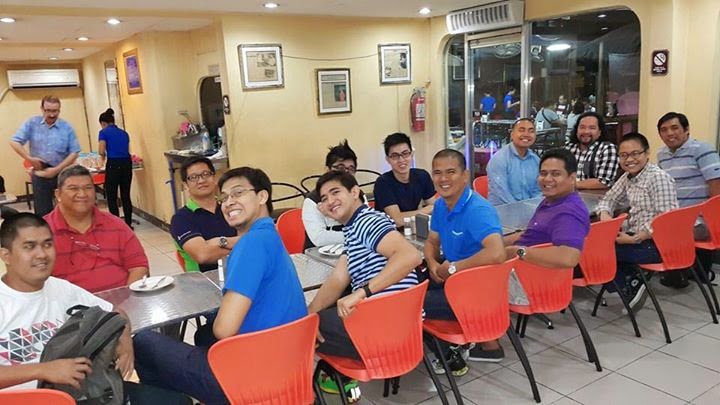 Dinner at Behrouz, after cell time.

*
In all this you greatly rejoice, though now for a little while you may have had to suffer grief in all kinds of trials. These have come so that the proven genuineness of your faith—of greater worth than gold, which perishes even though refined by fire—may result in praise, glory and honor when Jesus Christ is revealed. Though you have not seen him, you love him; and even though you do not see him now, you believe in him and are filled with an inexpressible and glorious joy, for you are receiving the end result of your faith, the salvation of your souls. (from the ESV)
christianity journal