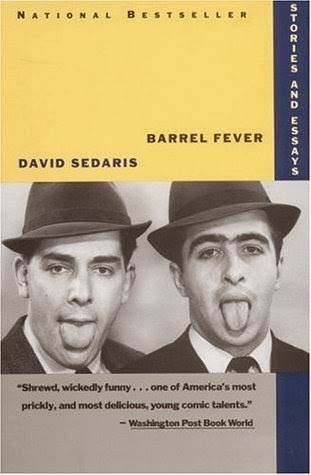 I DON'T remember everything about Barrel Fever by David Sedaris. I read it in a span of weeks, occasionally turning to it when I needed a good laugh. The book is short, and it was suited for my purpose.

The essay that stands out in memory: SantaLand Diaries, where the author talks about his experiences working as an elf—green tights and all—in a store's amusement park. It may well be a critique on the commercialization of the Christmas celebration, where parents force their children to sit on Santa's lap and ask him for gifts . Ah, the tortures these kids have to face. I was never really a Santa believer, and I always knew he never existed. The idea of reindeers and snow and gifts thrown down on the chimney: these were concepts that I found contemptible, even as a child. They would never survive in this heat, I thought.

A favorite line is taken from the story, The Last You'll Hear From Me. And it goes like this (and please forgive the language): "If you're looking for sympathy you can find it between shit and syphilis in the dictionary." It absolutely makes, doesn't it? I texted this to humor a good friend whose melancholic tendencies fascinate me. He's an extremely private person, so I shall not run the risk of mentioning his name, lest he disown me. He's thinking of going into Psychiatry. His reply indicated that he was fascinated with the quote, too.

The Diary of a Smoker gave me a glimpse of what smokers go through. Of course I have friends, close friends, who smoke. (Surprisingly a lot of medical students and doctors at PGH do.) Time and again I nag them to quit. I cite my moral and professional duty as a future physician: that I have to warn them of the carcinogens that can potentially shorten their lives. They dismiss my pleas altogether. I was thinking of these friends when I chanced upon this line:

The trouble with aggressive nonsmokers is that they feel they are doing you a favor by not allowing you to smoke. They seem to think that one day you'll look back and thank them for those precious fifteen seconds they just added to your life. What they don't understand is that those are just fifteen more seconds you can spend hating their guts and plotting their revenge.


Ha! That's me, the aggressive nonsmoker. So hate me and plot your revenge: if you're my friend, I shall haunt you with cigarette-smoking-is-dangerous-to-your-health warnings until you quit. You probably won't, but I'll do my best.
journal reading