Meeting students from other med schools 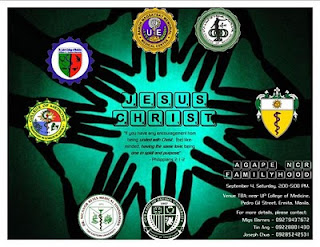 I had the privilege of hosting the program of the NCR-wide meeting of medical school Christian organizations last Saturday. I was able to interact with other students and hear them testify of God's faithfulness.

Dr. Ramon De Vera, a surgeon from the Philippine General Hospital and the UPCM Agape adviser, spoke on Christian fellowships making a difference in hospitals and med schools. He zeroed in on the examples of Daniel and his friends (Daniel 1: 8, Daniel 1:17-18) who determined to honor God by not defiling themselves with the idolatrous culture of Babylon. It was a hard choice. If they did not worship other gods, they would be thrown into the furnace. But they stood their ground, knowing that the God they served would rescue them.
The take-home message: as Christians studying medicine, we ought to live lives of integrity, honor, excellence, and love of others, to the glory of God. Excellence here is not topping the tests all the time, but doing our best. The excellence, after all, is not in the result but in the process.
Dr. De Vera's message reminded us to lean on the Lord and live for Him at all times.
What really blessed me was the time of sharing. In my small group, I heard stories of how God has been at work in other schools and lives. I learned that fellowships in other medical schools have been able to actively share the gospel, encourage others in prayer, and minister God's word to the troubled.

One student spoke of how rampant cheating is in their class. Those who have professed faith in Christ, however, are standing their ground. She told us that the temptation to go with the flow can get so strong. Cheating, after all, would mean higher grades with the least effort. When their exam results were released a couple of weeks ago, many of those in the fellowship had to take the removals because they refused to cheat. She was heartbroken but hopeful that the Lord would see her and her friends though.

That and many more uplifting stories we heard that afternoon. Such a refreshment to the soul, don't you think?
christianity journal