Showing posts from December, 2016
Show all

December 28, 2016
The Metro Manila Film Festival selection this year has been a pleasant surprise. For the judges to have done away with awful romantic, formulaic films, to have finally gotten rid of the recurring Filipino-Chinese family-problem themes (after, what, six or seven sequels?), to have censored supposedly funny superhero films whose only redeeming quality had been the large, gaudy entourage during the Parade—they have finally realized (or they’ve done so long ago, but only had the guts to do something about it now) that Filipinos, too, take pride and joy in watching sense and intelligence and good humor. Id est, good films worthy of our 200-plus-pesos tickets and a little less than two hours of our time. I pleasantly whiled away time at the local cinemas and didn’t mind the long queues—I had, after all, a book, which temporarily removes any need for human company. This is how I prefer to watch movies: alone, lest I disturb the people around me. I have coffee or tea in between movie breaks
1 comment
Keep Reading

December 24, 2016
Tim Keller, who pastors Redeemer Presbyterian Church, is interviewed in The New Yorker  York Times ("Pastor, Am I A Christian?"). He's asked: What I admire most about Christianity is the amazing good work it inspires people to do around the world. But I’m troubled by the evangelical notion that people go to heaven only if they have a direct relationship with Jesus. Doesn’t that imply that billions of people — Buddhists, Jews, Muslims, Hindus — are consigned to hell because they grew up in non-Christian families around the world? That Gandhi is in hell? Read his wise response here .
2 comments
Keep Reading

Christmas in the hospital: an unexpected celebration

December 24, 2016
I GO ON 24-hour shift today, on this cloudy Christmas Eve, while the rest of the world celebrates with friends and families. It doesn't bother me. While riding the taxi this morning, surprised that traffic was going smoothly (Quezon City to Manila in less than 20 minutes!), I thanked God for Christmas: for coming to earth to become man to save me—all of us, sinners—from our sins. John Bloom, one of my favorite bloggers, writes : This Christmas, do not be surprised if you find yourself worshiping Jesus where you did not expect to find him. He goes on to write that Jesus has always broken expectations. He ponders on the meaning of the celebration: Jesus came into the world at a desperate time in a desperate way. It wasn’t the way people expected him to come. It wasn’t for the reasons they expected him to come. He did not come to meet their expectations but to love them in the ways they most desperately needed.  For Christ, Christmas is not about tradition but salvation;
Post a Comment
Keep Reading

Trip to Solidaridad, the store owned by F. Sionil José

I DRAGGED my friends Karen Montevirgen-Mondragon and Jay Magbojos to Solidaridad, the quaint, quiet bookstore owned by the writer F. Sionil José. It's in the neighborhood, near the intersection of Bocobo and Padre Faura Streets, a private store that sells books, albeit more pricey compared to their counterparts at National Bookstore. But I always like the sweet smell of books, both old and new, and the classical music—mostly Bach and Mozart—that plays in the background, so I always visit when I have the opportunity. One can find rare books in the store, even those published by NYRB, like this essay collection by Max Beerbohm, which I shall buy next. I must confess that I've never read any of Mr. José's books. I don't know why, but I should really find the time.
1 comment
Keep Reading

December 21, 2016
As doctors we commit to decisions that mean life or death. I suppose, given the variety and severity of cases we—internists-in-training—see every day, this is inevitable. How must we wrestle with the daunting task of taking care of several critically ill patients and deal with the fact that we only have one or two vacancies in the Medical ICU? Who should we prioritize? Dr. Flàvia R. Machado’s piece [1] illustrates this peculiar dilemma. It’s a worthwhile read. We begin another day at 7:00 a.m., and once again we need to decide who will get an intensive care unit (ICU) bed after an elective surgical procedure. A 55-year-old grandmother with colon cancer? An elderly man with liver metastases? A young woman suffering from pain who needs an arthrodesis to keep working so she can continue to feed her family? Should we choose or deny patients because they have cancer? Should we choose on the basis of age? On patients’ previous quality of life? Or on social impact, if, for instance, one p
1 comment
Keep Reading

PRAISE be to God for a great time during the seniors' Christmas Party. So much laughter, games, and food. Seafood paella by Roland Angeles. Paella disarms me all the time. Roast chicken by Carlos Cuaño. So tender, juicy, flavorful—best served with a squeeze of lemon. And, hands down, one of the best pastas I've tasted: squid-ink noodles smothered with crab fat (alige) by Roland. Not in photo: crispy lechon. After that: a series of crazy games (newspaper dance, trip to Jerusalem, bunong braso) that left us all tired, in a happy kind of way. I went to residency to train and not to make friends. I guess it's an added bonus that I've made good friends along the way.
Post a Comment
Keep Reading

The parking lot outside WHEN I was drowned in Pay Floor referrals in 2015, I used to look out the window of the fifth floor MROD call room and watch all the cars in the nearby Robinsons Manila parking lot. There were people enjoying the mall, while I was stuck in the hospital. These memories come to me so easily as I go on duty tonight.
Post a Comment
Keep Reading

MY PARENTS crave Filipino food. It's not a proper meal, for instance, if there's no rice served. We can convince Tatay to try other cuisines; he has liked Korean, Japanese, and Thai thus far. He takes photos of the things he eats. If he had grown up in the time of Instagram, his feed would be busy.  Mother, on the other hand, can't be bothered—she loves her fish and steamed/boiled vegetables—and can't tolerate beef. The smell makes her nauseous. I went home one day from the hospital to find that they hadn't prepared anything for dinner yet; they had just flown in from Mindanao to pay a visit to Mother's doctor. The default eat-out place is Provenciano along Maginhawa Street, now home to many restaurants, its popularity as a gimmick place (do people still use that word?) having grown these past years so much so that the traffic gets congested during pay days and weekends. Thankfully it's just a few blocks away from where we live. We had the pansit mol
3 comments
Keep Reading 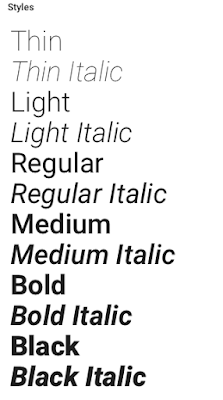 YOU'LL notice that I've switched fonts again. I'm now using Roboto , designed by Christian Robertson, made freely available at Google Fonts. From the foundry: While some grotesks distort their letterforms to force a rigid rhythm, Roboto doesn’t compromise, allowing letters to be settled into their natural width. This makes for a more natural reading rhythm more commonly found in humanist and serif types.
Post a Comment
Keep Reading

On our last Physician-on-Duty (POD) duty, Racquel Bruno—Executive Officer of the Department for 2017—and I were bogged down. Many admissions for the night, many responsibilities awaiting us, and many meetings set for the next few weeks were running through our heads. We were going to be seniors when the clock struck 12. But we started our first day as seniors with a hearty breakfast with our interns JB Besa (whom I’ve been calling President; he heads their batch), Paolo Torres (who had ample time showering and changing clothes), and Gelo Tampus (who also took up Molecular Biology in undergrad). Overworked, never-paid; they helped us take care of our numerous, critically ill patients at the ER. This was the least Racquel and I could do for them.
Post a Comment
Keep Reading

WE FOUND a new after-morning Sunday worship service spot— Kandle Café , along Mother Ignacia Street, Quezon City, a five-minute walk away from church. It opens at 11 am. We were the first customers, and the place was devoid of hipsters, noisy teenagers, or Filipino families with noisy, crying children—crowds one would do well to avoid if one desires peace, quiet, and a short nap. It goes without saying that I only had three hours of shut-eye last night. I understand the place gets jam-packed on the weekdays, so we had come at the perfect time. The internet is reliable, there are sockets all over, the tables are at about the right height: tell-tale signs that this will become a popular spot for people studying for board exams or periodical exams. Coffee shops, even restaurants, have become modern-day libraries.
Post a Comment
Keep Reading
More posts