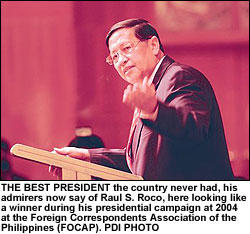 "I WANT to be remembered as someone who planted the seeds of change."

He said that he did not want accolades, and that his greatest legacy would be his dream of a new Philippines devoted to the basic tenets of democracy, fair play, decency, dignity, honesty and honor in public service.

But he is dead. "And where are the seeds of change?" we may ask.

His son gives us a wonderful answer: Let the seeds spread. The grass will be greener the next day.

I learned of this untimely death while I was browsing through the Inquirer-GMA website. Shocked, I read the whole story and felt downtrodden after. He was a great political Filipino icon: he didn't take sides when that was what the others did.

So that was the reason why, all along, I didn't hear the intelligent, sensible eloquence of Roco these days. He was confined in the hospital, perhaps waiting for his day of death. I think he'd make a good president, but how can he be one if the majority of this ignorant, self-seeking voting public would choose to elect actors instead of true leaders?

Haven't you noticed? Two of the President's opponents in last year's election are already dead.