Showing posts from November, 2011
Show all

How we do the handmime

It's this time of the year again. TRP (Tao Rin Pala) is fast approaching. Held every December, it's the biggest show in the UP College of Medicine, featuring talents otherwise repressed by the daily grind of med school life. For the past years, Agape has been doing handmimes. Those peformances have become the org's signature, for lack of a better term, because no other organization has attempted to do them, at least to my knowledge. Last year, Agape did  "He Opens a Window,"  a song from the musical, Joseph The Dreamer. In 2008, it was  "Who Am I"  by Casting Crowns. In 2009, it was  "All For Love"  by Hillsong. You can watch them in YouTube. Those handmime presentations have been avenues to minister God's message to the professors, students, and staff of the College. Music and songs can only go so far, of course, but who are we to limit the Lord in His ability to move in the hearts of the listeners?
4 comments
Keep Reading

These past months I've been reading 1 Peter for my early morning daily devotions. Penned by the apostle of Christ, and from whom the book was named, this New Testament epistle encourages the early Christian believers to live victoriously in the midst of persecution. The pictures going through my mind were those recorded in the Fox's Book of Martyrs (you can read the  book online for free ). The ordeals the early Christians had to go through, especially during the time of the infamous Emperor Nero, were gruesome. At the time it was one thing for the early believers to say they  believed in Christ, but to boldly profess and demonstrate faith in the face of shame and persecution—that was supernatural.
Post a Comment
Keep Reading

Warren Weirsbe's Be Myself: the longest journey is the journey inwards

I've resolved to make Christian biography and autobiography a part of my reading menu. Just recently I finished Warren Wiersbe's " Be Myself ." I borrowed my copy from the church library. (Many thanks to Ate Mabelle who patiently handles my book requests.) Warren Wiersbe is close to my heart because he wrote Prayer, Praises, and Promises . There he expounded on a particular Psalm every single day. He effectively drew out its context and application. I used the devotional for my quiet times during my third year in college, and it was used by the Lord to help me grow spiritually.
Post a Comment
Keep Reading

My mother is in town for the Philippine Dental Association annual convention. She makes time for these gatherings to see her two children working and studying in Manila. It's always a joy to see her, of course, and we praise God for the encouragement we get whenever we meet her. Last night, we had dinner at Gayuma ni Maria located at Sikatuna Village, Diliman, Quezon City.
1 comment
Keep Reading

I took quite a number of photos during my Bicol rotation, and while I would like to post them all here for everyone to see, I cannot. There are just too many of them. Let's start with my favorite portraits.  She's Margie Bo Bocaya. Born in Bicol, raised in QC. Owns a mansion in Tabaco (which I didn't get to visit, unfortunately). She was my seatmate on Day Two.
2 comments
Keep Reading

The Tour: Management Rotation in Bicol, Day Three and Four

It was as if it never rained the other day. Praise God! Finally the sun was up. We were all optimistic we'd be seeing Mount Mayon sans the clouds. We ate breakfast at Bigg's Diner, the local Jollibee of Bicolandia, famous for its goto and burgers. The place reminded me of Midtown Diner , one of my favorite places to eat lunch in Manila. The music was from the 60s. The floor tiles and wall decors were from that era as well. And the typography was excellent.
Post a Comment
Keep Reading

When we woke up, Legazpi City was drenched in rain. The clouds showed no signs of stopping. Krushna Canlas told us her flight was cancelled. It was that bad. We pushed through with our scheduled tour anyway. From the van we saw old churches.
2 comments
Keep Reading

Stranded and Rescued: Management Rotation in Bicol, Day Zero and One

The Management Rotation is the highlight of Third Year (LU 5) in the UP College of Medicine. During the week-long field work, the 20-membered block picks a hospital anywhere in the country to evaluate and assess. Throughout the years it has become an excuse for a decent vacation. We know of groups from previous batches who've gone to Boracay, Davao, Baguio, and other tourist destinations in the country. Clearly we weren't planning on being the exception. Our destination: Bicolandia.
Post a Comment
Keep Reading

Snippets from a Sunday preaching

At Higher Rock Christian Church , we're doing a pulpit series on the Book of Acts. Last Sunday, Pastor Bob Amigo taught from Acts 3, and zeroed in on Matthew 27, to shed light on Peter's preaching. The all-important question that every human being is confronted with is, "What will you do with Jesus, who is called Christ?" Our answer to this has significant, even eternal, consequences. I pray you can set aside 14 minutes of your time to listen to this snippet of a recording from last Sunday's preaching. Many thanks to Kito Espiritu for editing this.
Post a Comment
Keep Reading

Boredom often begets creativity, and I like to think that was what happened to me a couple of days ago, when I went out of my apartment, taking pictures of anything and everything under the sun. I want to share with you how my living environment looks like, right smack in the center of Philippine politics, pollution, flooding, and street crime. My old building is beside the Manila Science High School, home of nerds who used to win televised quiz shows when I was younger.
Post a Comment
Keep Reading

Michael Cunningham's The Hours: while the rest of 'em visited the dead . . . 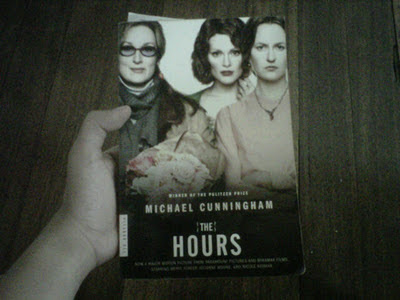 Spent the entire day in Quezon City, reading Michael Cunningham's The Hours . The novel revolves around three characters: Clarissa, a bohemian 50-year old who organizes a party for a friend, almost her lover at one point in time; Virginia (as in Woolf), the writer recovering from her mental instability at Richmond, dying to go back to London where much of the action is; and Laura, a wife who takes on the challenge of baking the perfect cake for her husband. Cunningham's prose is breathtaking; he writes beautifully, and this is probably why I enjoyed this book so much--the fascination at how a writer can capture the most palpable emotions through carefully chosen words.
2 comments
Keep Reading
More posts