This has been a good year for reading. I wish I had read more books, but in between chemotherapy, academic reading (which I don't count as reading, in the way that I define it here, i.e., reading for pleasure), I could only squeeze in a few. Which is not to say, of course, that reading DeVita isn't pleasurable—it can be. Nevertheless, here are my most memorable reads for 2018.

[Before I launch into my list, I asked some friends and family to list their favorite reads, so I can convince non-readers to try out the habit. You can read Kuya John's top seven, Manong Ralph's top ten, and Ate Liw's many recommendations, including those that had lasting effects on her. In a sense, you are what you read. Surely, you don't want to be defined by the fact that you only read pep.ph—that, too, is mildly entertaining, but there are greater joys to be had.] 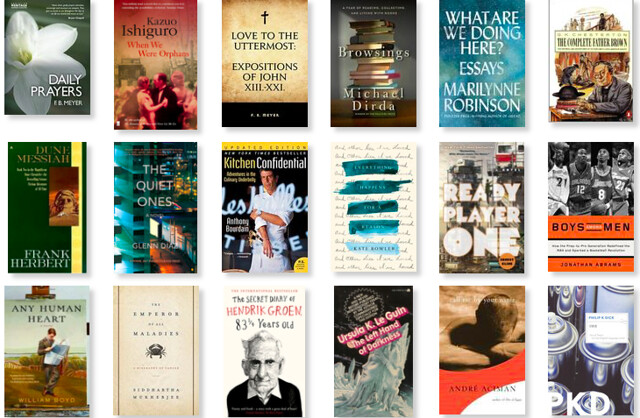 1. Institutes of the Christian Religion by Jean Calvin

After a year, I finished reading volumes 1-3 of John Calvin's The Institutes of the Christian Religion. I mostly read it in my Kindle during my morning commute to work, a ritual that affords me the chance to read works of literature outside of my standard readings in oncology. The Institutes now belongs to my list of favorite books of all time, along with Augustine's Confessions (which was often quoted by Calvin). Calvin's main thesis is justification by faith alone through Christ alone. It is the "alone"—the exclusivity of faith, the rejection of good works (or good works with faith), as a means to salvation—that creates the major doctrinal difference between Calvin's faith and Roman Catholicism. More here.

This book is a collection of speeches of the late US Supreme Court Associate Justice Antonin Scalia known for his conservative interpretation of the US Constitution ("originalist") and his colorful and passionate opinions. At some point his book made me tear up when Nino—as his best friend, Justice Ruth Bader Ginsberg, called him—wrote about his father and his childhood. His tributes to his friends were also moving. I wish there were more like him in government. He once said, "“If I have brought any message today, it is this: Have the courage to have your wisdom regarded as stupidity . . . Be fools for Christ. And have the courage to suffer the contempt of the sophisticated world.” More here.


3. The Emperor of All Maladies: A Biography of Cancer by Siddharta Mukherjee

I wrote, "It is a narrative that illustrates the value of the scientific process, and how basic sciences—molecular biology, chemistry, and physics—form the backbone of medicine's understanding of this disease. The book excels in outlining the doubts and worries of the scientific community, a reminder that uncertainties lead to scientific questions; and with the questions come the answers—not as an inevitability but as a possibility. In a situation where death is impending, any possibility spells the hope of relief, if not an actual cure." What an exciting time to be in the field of Oncology! More here.

I quoted F.B. Meyer many times this year. This work is an exposition of the Gospel of John, highlighting the love of Jesus, a love that is to the "uttermost." I'll go back to this masterpiece of Christian literature to cheer and encourage my soul. If you find printed copies of any of his books, kindly alert me.

4.5. Browsings: A Year of Reading, Collecting, and Living With Books by Michael Dirda

These are reflections of Washington Post book critic and Pulitzer prize winner Michael Dirda about the joys of reading. These came out initially as weekly essays he wrote for The American Scholar. He is neither snobbish nor proud, but he exudes the childlike charm of a bookworm, and he loves reading so much that he wants to convince every person to get into the habit. Towards the end of this work, he quotes Franz Kafka, "The books we need are the kind that act upon us like a misfortune, that make us suffer like the death of someone we love more than ourselves, that make us feel as though we were on the verge of suicide, or lost in a forest remote from all human habitation—a book should serve as the ax for the frozen sea within us." Thanks to him, I got into a book-buying frenzy this December, having purchased Elena Ferrante's four Neapolitan books in one go because, according to him, to own a book is to own it physically. This was—and still is—a joy to read and reread. I imagine myself going back to Browsings to check his recommendations for what kind of fiction to read on holidays, what science fiction to enjoy, and so on.

5. Lincoln in the Bardo by George Saunders

President Lincoln and his dead child, in a gripping, heart-wrenching story about longing, death, and separation. What a delight—like reading an obituary in the backdrop of Dante's Inferno.

"Paul Artreides's sister Alia is now grown up, a sarcastic, powerful, intuitive Reverend Mother, trained in the ways of the Bene Gesserit. Paul is now called the Muad'dib, the Emperor of the known worlds in the galaxy, and he has to confront opposition, intrigue, and mystery that comes with his powers." More here.

7. The Quiet Ones by Glenn Diaz

"What with all technical papers I need to write and the oncology journals I need to read, I can't get my eyes off Glenn Diaz's The Quiet Ones (Ateneo Press), winner of the 2017 Palanca Grand Prize. It is a masterful work of someone who breathes the English language in Filipino atmospheric conditions. The book is about a call center agent who gets involved in a scam and who scrambles out of Manila to escape the authorities. The details that intersperse the story make the novel riveting: such as this scene at the PGH Cancer Institute. Alvin's mother had pancreatic cancer." More here.

8. The Left Hand of Darkness by Ursula K. Le Guin

This book challenges the notion of love and sexuality, the way only science fiction can question our reality. A representative of the Ekumen goes to the Gethen, in the hopes of convincing the leaders of the planet to join the confederation of celestial powers. The Gethenians are ambisexual—they change sexes after a period of time. Ms. Le Guin was a writer ahead of her time. She passed away this year. More here.

The old fascinate me. Mr. Groen is an 80-something man who lives in a nursing home in the Netherlands. A sensible, decent man, he likes to keep to himself, his diabetic friend who would lose his toes due to neuroischemic foot ulcers, and his geriatric gang that goes out once a month. He also falls in love. Asians would probably not get the point of putting their parents in these institutions, for we would rather take care of our old ourselves, in our own homes, but this book nevertheless adds to my understanding of the unique challenges posed by aging.

There's so much that history can teach us, only if we allow it to. In this gripping work by John Julius Norwhich, he draws themes from history's most powerful men in Europe.

Other books I read


When We Were Orphans by Kazuo Ishiguro

An English detective, who lost his parents in Shanghai, finds the truth about his parents. The book reminded me of the old streets of Hong Kong, for some reason.

Where Europe Begins with Yoko Tawada

I didn't enjoy this as much, unfortunately. The stories seemed weird to me.

Have you seen the BBC series, Killing Eve? It's about an awkward detective who looks into the murders committed by a trained, brilliant, beautiful sociopath. A short read but was just as thrilling as the series starring Sandra Oh. The series was painfully short. No season two yet?

The Berlin Stories: The Last of Mr. Norris & Goodbye to Berlin by Christopher Isherwood

These reminded me of long train rides in Europe, and the many conversations I overheard there.

Boys Among Men by Jonathan Abrams

I belong to a cell group in church called Pilgrims, which is comprised of basketball-loving and -playing men, with whom I share a love for Christ and the Bible. I wasn't gifted in the sports department, so what would be the best alternative way of learning about basketball? In this book, Mr. Abrams, explores the lives of players who transitioned from high school straight to the PBA, bypassing collegiate tournaments. NBA is brimming with intrigue and malice, apparently, and all of that happens during the drafts. The young are vulnerable, and they need the support of family and friends.

Everything Happens for a Reason by Kate Bowler

"The book attempts at being coherent; it is divided in nine chapters with a preface that begins with, 'There's a branch of Christianity that promises a cure for tragedy. It is called by many names, but most often it is nicknamed 'prosperity gospel' for its bold central claim that God will give you your heart's desires: money in the bank, a healthy body, a thriving family, and boundless happiness.' But cancer is hardly coherent." More here.

Theft by Finding by David Sedaris

Mr. Sedaris is among the funniest people alive. The books comes straight out of his diaries. The entries are absurdist. In reading this, I reminded myself to become more observant. Each day, each person is unique and could end up in my own journal.

Hillbilly Elegy: A Memoir of a Family and Culture in Crisis by J.D. Vance

The first book that made me realize that poverty creates a culture among those living in it that they can only go as far in life as their predecessors—until someone tells them otherwise. This is a biography of the lawyer, J.D. Vance, who is proud of his Appalachian, hillbilly heritage.

A group of inertials—men and women who have the special ability to negate powers of precogs and telepaths—is killed by a blast. The survivors go through a time warp and are subjected to rapid deterioration themselves. The panacea is a special spray called Ubik.

Ready Player One by Ernest Cline

By now, this must sound cliché, but the book is way better than the movie.

Any Human Heart by William Boyd

The journals of the fictional Logan Mounstuart, who comes from a privileged English background.

Mr. Murakami runs to fuel his writing. No wonder why he looks so trim!

What Are We Doing Here? By Marilynne Robinson
The Complete Father Brown by GK Chesterton
Too Much Happiness by Alice Munro
The Doctrine of Regeneration by Stephen Charnock

Call Me By Your Name by André Aciman

At some point I could not take the language, as it bordered on the lascivious.
reading