John Calvin shows the beauty of the gospel 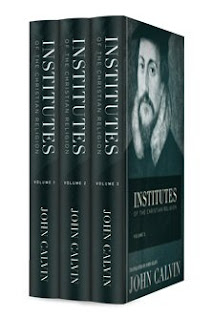 After a year, I finished reading volumes 1-3 of John Calvin's The Institutes of the Christian Religion. I mostly read it in my Kindle during my morning commute to work, a ritual that affords me the chance to read works of literature outside of my standard readings in oncology. The Institutes now belongs to my list of favorite books of all time, along with Augustine's Confessions (which was often quoted by Calvin). Calvin's main thesis is justification by faith alone through Christ alone. It is the "alone"--the exclusivity of faith, the rejection of good works (or good works with faith), as a means to salvation--that creates the major doctrinal difference between Calvin's faith and Roman Catholicism. It is so big a difference that Protestantism came into being, a movement that was ushered in by a renewed meditation of what Scriptures had originally meant, a deeper understanding of the love and mercy of God through Jesus Christ, a humbling realization of the uselessness of good works, the depravity of man, and the holiness of God.

John Calvin, this (based on biographies) 27-year old, introverted, serious academic, so consumed with the love for God's Word, wrote thus:

For it states this to be the order of justification; that from the beginning God deigns to embrace sinful man with his pure and gratuitous goodness, contemplating nothing in him to excite mercy, but his misery; (for God beholds him utterly destitute of all good works;), deriving from himself the motive for blessing him, that he may affect the sinner himself with a sense of his supreme goodness, who losing all confidence in his good works, rests the whole of his salvation on the Divine mercy. This is the statement of faith, by which the sinner comes to the enjoyment of his salvation, when he knows from the doctrine of salvation that he is reconciled to God; that having obtained remission of sins, he is justified by the intervention of the righteousness of Christ; and though regenerated by the Spirit of God, he thinks on everlasting righteousness reserved for him, not in the good works to which he devotes himself, but solely in the righteousness of Christ.

That I am saved solely because of Christ, and not because of any good I have done, is the all-encompassing truth on which my life revolves.
christianity reading