November 25, 2017
We were taking selfies before "selfie" even became a word*. My good friend Wegs Pedroso owned a portable blue Sony digital camera that she brought with her everywhere, especially during lab classes where she took photos of slides straight from the microscope then uploaded it in Multiply, a terrific photo-sharing site before the Facebook era. This was the camera's primary utility, but Wegs also used it to take photos of ourselves, while picking samples of Dieffenbachia, or eating at CASAA (already burned down, to our dismay, as the place sold delicious turon), or hanging out at Albert Hall in between PCRs. Her primary subjects were me, Dianne Deuna (who's doing further studies in marine biology--so cool!), Juanchi Pablo (who's based in the States, married, with a smart kid, but still balding), and our other block mates in molecular biology. This is my personal history of the selfie. How we managed to get everything done still escapes me!

But when did this phenomenon start? Jonah Engel Bromwich of the New York Times set out to find the first selfie taken in history.

Robert Cornelius's photo, taken in 1839, is considered the first selfie, but "he ran into the frame. Could it be argued that a selfie must be taken using a hand-held camera?" 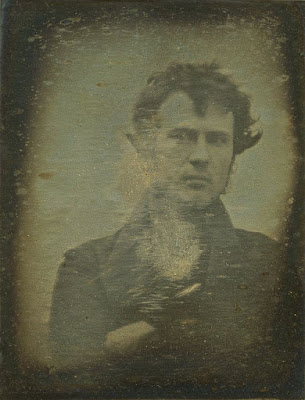 From The Public Domain Review.

The image in question was taken in 1839 by an amateur chemist and photography enthusiast from Philadelphia named Robert Cornelius. Cornelius had set his camera up at the back of the family store in Philadelphia. He took the image by removing the lens cap and then running into frame where he sat for a minute before covering up the lens again. On the back he wrote “The first light Picture ever taken. 1839.”

I've gotten past the impulse to take selfies. I've done it so rarely these days--during my roommate Tom's 30th birthday (for posterity); my travels, mainly to appease my father ("Tay, nakita ko na ang Eiffel Tower!"); or when my students insist, usually after rounds--as I find the exercise rather extraneous. Seeing photos of myself online also makes me uncomfortable.