January 12, 2013
WE'RE ALREADY on the second week of the year 2013, but for reasons already familiar to you—sloth, stress, the black hole called the Philippine General Hospital—I haven't posted any year-in-review article for 2012 yet. Which is unfortunate, really, because 2012 has been a great year for me.

A picture paints a thousand words, so the song goes. Here's a compilation of all the photos I posted for my Weeks in 2012 Project, where I took seven photos of random people and things every week. The idea behind the project was for me to narrate my life through pictures. Some events are better remembered that way, I guess, but how pumpkin soup describes my journey through life remains a puzzle, even to me. I'll give the project a sabbatical this internship year, where I expect to write fewer entries. "I'm still nursing thigh and calf pains, about 5/10 in severity, relieved by rest, and aggravated by movement, but I keep looking back at the past four days of this rather spontaneous trip to Northern Philippines and ask myself what made this trip awesome. Was it the view? Of course, that was a major factor. Was it the fulfilment at having survived the longest treks I've done in my life? Yes, that one, too. But more than these, I think it was the company."

February: To the first baby I have delivered

"I was overjoyed when I saw you. My delight was a combination of anything that accompanies a memorable first experience and of the sheer sight of a living human being seeing the world for the first time. All my stresses disappeared momentarily when I heard your noise, an announcement to everyone that you have, after 37 months of being in the womb, arrived. 9:30 PM, February 18. I will mark that date forever."

"Denial is my reflex reaction to news of death. I don't wallow in grief all at once; I walk away, pretend I never heard the news, and go on with whatever it is I'm doing."

"And I realized that was what I wished for on my 25th birthday: I wanted the Lord to make me an upright man. O, that God would grant me a heart that rejoices in truth and love and holiness, a heart that seeks after His own!

"I still have so many jagged edges. I struggle with a lot of things. And day after day, I'm reminded of how sinful a man I am—in my thoughts, words, and deeds. But I rejoice and take comfort in the fact that, more than 2000 years ago, Jesus Christ chose to die for all my sins on that wooden cross, gave me new life, and is daily changing me to be more like Him."

"Are you going for Mild or Wild?" Jojo asked us before we began. "WILD!" we yelled back. My companions were adrenalin-rush addicts, and so was I. The wilder we wanted it, the more flipping we got. Those were the moments when I most enjoyed the rafting adventure. The trick is to let yourself fall and to keep your mouth shut lest you swallow river water. Suffice it to say that I fell seven times. I may have taken sips of Cagayan River here and there. 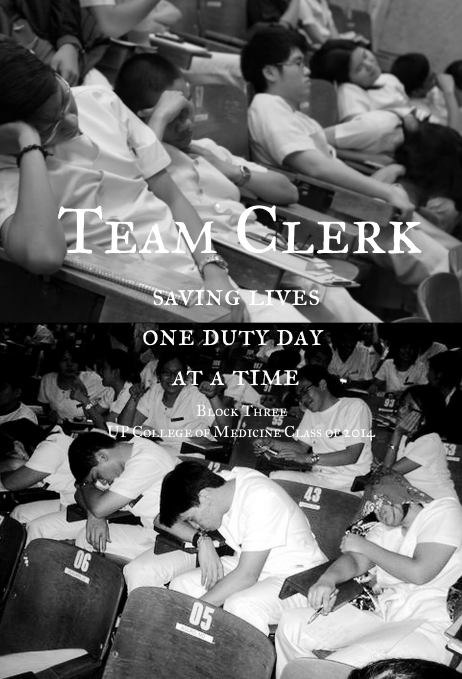 July: For when I am weak, then I am strong

"Almighty Father, remind me that I need you every day, as I am inclined to trust in my own devices, thinking I can make it through the day on my own. Show me how depraved and sinful I am, how large my need is for Your grace to win the battle against my godless desires and motives, that I may cling on to You, my joy and strength." "My patient at the Medical ICU (MICU) liked writing notes. He was intubated when he came in, so I never really got to hear him speak. He relied mostly on hand gestures, but even those had their limitations. His wife had a brilliant idea: maybe he could write things down instead. Every time I dropped by his bed, I saw a notebook and a black marker pen beside him. I would ask him a question. Slowly he would jot the answer down."


October: Memories of IM Past

"The two-hour session would start with a quick rundown of mortalities and mortalities of the previous 24-hours, followed by moments of silence as the senior residents, seated at the topmost row, picked one case to be discussed for the day. The ensuing tension was similar to the choosing of Katniss Everdeen's sister to represent District 12 in the Hunger Games, where one either lived or died."

"I thought I had known what it meant, "torpe," a word I hear in every day parlance, in songs, on television, but I didn't take the effort to search for its actual meaning, the same way I didn't bother looking for the definition of "astig," "toma," or "chever" because, well, people just happen to know what they stand for. But my lexicographical laxity gave way to ignorance, and I had been mistaken all along. I still don't know a lot of things, apparently, and all these years I've misunderstood "torpe" entirely."

"Unless you become a Christian, you stand with every other unbeliever under God's condemning hand. The punishment is eternal death. "But God, being rich in mercy, because of His great love with which He loved us, even when we were dead in our transgressions, made us alive together with Christ" (Ephesians 2:4-5). "
blogging