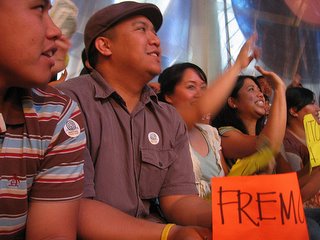 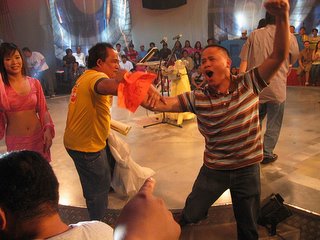 I've just returned from an exam when I learned that the death toll in the Wowowee stampede has reached 70. The nation is mourning for this. After all, who would've imagined that the first anniversary of a silly (yet, for some, enjoyable) lunchtime show would turn out to be so disastrous?

I'm too tired to write now, but Ate Rae Rivera (who also goes to Church as I do) wrote her opinion in an email sent to the Yahoo Group this morning.

I just heard on the news this morning about the stampeded in ULTRA that killed 60 to 66 people [the death toll has risen]. 66 people trampled underfoot as people pushed their way into the stadium to watch WOWOWEE. It has been reported that many of these people were lined up since Wednesday and they came from all over the Philippines just to witness the 1st anniversary special of WOWOWEE.

My mind is seething with disgust and pity at the senseless death of these 66 people. Disgust because I couldn't imagine how useless all the stampede was for. Pity because you see how useless the world's ambitions are.

She goes on to say that as Christians, we should mold our minds to be like Christ.

Mold it [the mind] to become like the mind of Christ. Cast down every argument and every lofty thing that exalts itself against the knowledge of God. Instead, bring every though into submission to Him. (Psalm 139:23,24; 2 Cor. 10:5). Be conscious of where you soak your mind, especially during your leisure time (Eph 5:16). Know what your mind is supposed to dwell on! (Phil 4:8).

She writes that the cause of our death should not be the pursuit of vain and early things. She says, "I pray that when we do die, it will be a death worthy of our calling in Christ."