And so the Lion roars, and I will watch him 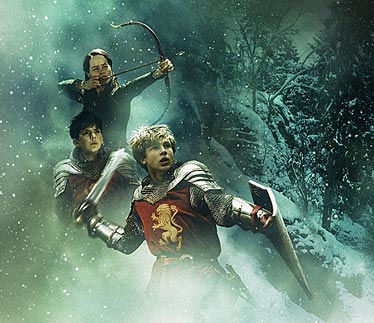 I've been postponing the writing of this entry. I guess the most difficult things to write about are those which happen to us rarely, and thus leave defined imprints in our memory. But here I am, writing this one, hoping that someday, years from now, I would still feel this excitement, undiminished by time.

I'm going to watch The Lion, The Witch and The Wardrobe today, for the first time in my life, since it's really the first time it will be shown in Manila theatres. Unless you've been secluded from the real world, hiding in dark, moist caves in an isolated island, you should know that it's a movie based on the children story series by C. S. Lewis, one of my favorite writers of all time.

I began reading the first book, The Magician's Nephew, almost a year ago. The books were borrowed from the Church's library: I applied for a card primarily to do that. My roommate, Jason, knows very well how often I would exclaim, often in lucid intervals, about how Lewis writes so magnificently (simply yet profoundly), how the story is so meaningful, etc. It is a book--and perhaps all the books in the series are, too--that one cannot simply put down, because it casts a spell very unlike that which the Harry Potter book series casts because it draws one to timeless Biblical truths. Harry Potter shrinks in comparison with the Narnia series. But this is a personal opinion.

And so I proceeded reading The Lion, The Witch and The Wardrobe immediately after The Magician's Nephew. I noticed that the stories are not exactly continuations of each other, though they bear familiar relations with the previous books. Lewis often makes mention of the events that have transpired in the previous book, telling the reader, "How could you have proceeded without reading my books in order! I am sooooo hurt!" But I'm just joking.

TLTWTW, by far, the most dramatic and moral-packed story among all the others, crashed my age-old notions of what children's stories should be like: naive and, to a degree, stupid, had it not been for the colorful illustrations. The second book is, after all, about the best story in the world: that which saved man and connected him with a holy God once again after his fall.

I particularly liked Lucy, the youngest of the Pevensies, but I've always told everyone that I am Peter, the High King of Narnia, and my brother, the traitor Edmund (Manong will protest when he hears this!). Jadis is also a unique character because she portrays how sin can entirely ruin one's life, and if one's life is, in fact ruined, a ruined life will ruin more lives, especially those it has contact with.

But my favorite character is Aslan, the majestic lion whose character is unblemished, whose presence is both loved and feared. He is Jesus in this story because he died for his supposed enemy, Edmund the wretched traitor and he loved all of Narnians to the end. Lewis wrote something like (and these are not the exact words) you wanted to stroke his mane but you are afraid to do so... He is the character that made this story what it is: not merely something about doing-good-to-others, but rather of the sinfulness of man and his great, urgent need for a Savior.

And so I read books in the series. I must confess, though, that I still haven't even started reading The Last Battle, the seventh one. I want to prolong my agony, if not my anticipation, as to the details of how the story will end. Friends tell me that it's the "best" book, and I really do hope so. A series that begins with bang must end with a nuclear bomb.

After Church, I shall be off to the nearest moviehouse, my hands drenched with sweat, my lips muttering, "Please, let the movie be good! Let me not be disappointed!"

But the moviemakers must have made sure that everything should go on nicely. After all, if that doesn't happen, they will bear the scorn of the Narnian readers. I'm joking, of course.