September 22, 2019
The last time I stayed this long in bed—say, five to six hours, give or take—after waking up was, to be honest, a long time ago. So distant was the memory that I couldn't even remember. Yesterday, however, with the gloom and drizzle outside, and with the recent conclusion of the medical students' oncology module which I helped coordinate, I started my morning at 6 am with a fresh cup of brewed coffee, and, still in my pajamas, grabbed two books from my shameful but proud tsundoku pile. The first was The Science Fiction Hall of Fame Volume I (Avon Publishers, 1971), edited by Robert Silverberg, lent to me one of my mentors, Dr. Ding Fernando, a few months ago. The second was Those Who Leave and Those Who Stay by Elena Ferrante, book three of the Neapolitan novels, which I also bought many months ago. It was perhaps the closest I've ever gotten to an actual shopping spree—I bought all the Ferrantes at National Bookstore, fearing I may not see them in stock again. 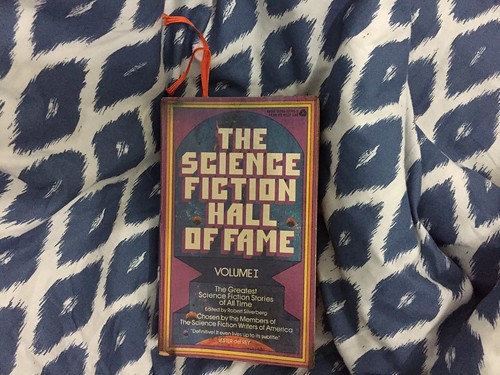 As with most short story collections, I did not read the stories as they were arranged, but picked, without a predetermined plan, the stories at the spontaneous moment of actual reading. I treated myself to these tales after a handful of reading materials in medical oncology which, too, offered an excitement of a more technical kind. Helen O'Loy by Lester del Rey was about men who fell in love with robots. It was tragic but romantic in a way that left me uneasy. Theodore Sturgeon's Microcosmic God was about a scientist who shut himself away from the world and settled in an island, working on experiments made easy by highly adaptable and intelligent organisms he had invented. Isaac Asimov's Nightfall was about the coming eclipse that caused insanity to the entire humanity. Lewis Padgett's Mimsy Were the Borogroves was about toys from another dimension and the children who disappeared after they had played with them. The Nine Billion Names of God by Arthur C. Clarke was about monks who believed that the world would end after the nine billion names of God had been written down. The monks commissioned computer scientists to speed up this task. 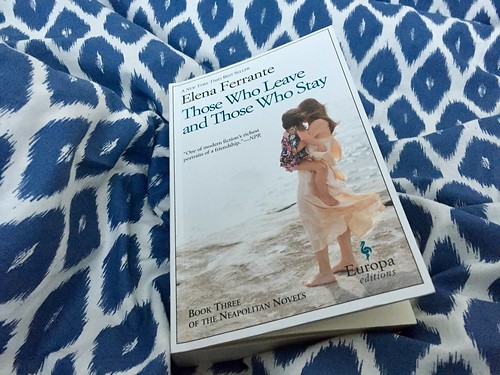 Those Who Leave and Those Who Stay was set in 2005, where Elena Greco was a writer and Lina Cerullo was a worker in a sausage company, already with a child of her own. Their friendship was complicated: they adored each other with a certain jealousy and contempt and fondness. Years have passed since I read the last Ferrante novel, but how this anonymous author weaves the stories, creates the characters' emotions, with interjections of humor, frustration, and anguish is beyond me: she is a master in her craft. To my mind, she is at par with Marilynne Robinson and Alice Munro—among my favorite contemporary authors. To understand Ferrante, and to see the city through my eyes, is the main reason why I want to visit Naples someday: so I can set an actual physical picture that will serve as a backdrop of my imagination when I return to her pages. In this sense, travel and reading are, in fact, complementary. 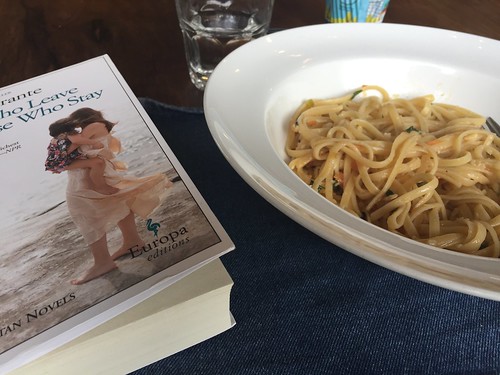 I interrupted this solitary reading confinement with quick walks to a restaurant that served Italian food, both for brunch and dinner. With all the Italian in my head and stomach, I may as well have gone to Napoli.

On my way home, I was almost hit by a tricycle as I crossed the street. It was a dark corner, and the lamppost was about to give up. It dawned on me then: I was, and still am, in Metro Manila.
reading