The Anatomist: A True Story of Gray's Anatomy 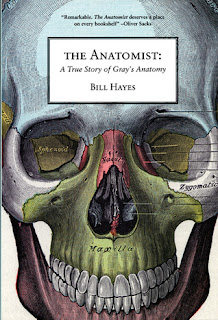 Anatomy wasn't my favorite subject. I under-performed, which is another way of saying I had failed an exam (by a half point!) and had to take the finals. While my classmates excitedly peeled the skin off  Big Bertha, I struggled with the entire process of naming each part. On hindsight I think it was at this point when I had realized I wasn't meant for surgery. I survived because of physiology, which pulled my grades up. I still like physiology; it's the backbone of Internal Medicine, where the Lord had brought me.

The book is the writer Bill Hayes's account of the otherwise quiet life of Dr. Henry Gray and his illustrator, Dr. Henry Vandyke Carter. One realizes that the second Henry deserves the authorship as much as the first. Both were ambitious and excellent physicians at a time when the study of medicine did not yet possess the same structure that it does now. Dr. Gray died in his early thirties (smallpox), while Dr. Carter suffered family conflicts (his wife had left him) while serving in India.

Interesting points in the book include Dr. Carter's struggles with Christianity. Mr. Hayes, having discovered Dr. Carter's journal, recreates what could've gone on in their lives. Some of it is speculation, as in what the two Henrys must have felt about each other (they admired and honored each other's works), but a lot of it, written in Dr. Carter's small, almost illegible handwriting was a reflection of what he had been going through. He found respite during Sundays, when he fellowshiped with the people of God. Most of the week he struggled with his lusts and lack of love for the Lord. I think Dr. Carter was a believer who genuinely loved the Lord and struggled to please and honor Him, but who didn't quite live as victoriously in the end.

Mr. Hayes took the extra mile to complete this book. He attended anatomy dissection classes thrice and enjoyed them, and his fascination about his subject reveals itself in the book's insightful, honest, and hilarious writing. One chapter began with a quote from Honore de Balzac (1829), "No man should marry until he has studied anatomy and dissected at least one woman." Mr. Hayes's evolution from a bystander during his first class into an often-mistaken teaching assistant in his last was amazing. He takes us to the pre-dissection era of Galen--who called the liver the seat of life, "hence its name, evolving from the ancient root, leip, association with 'life' or 'living,' which later became 'lifer,' and finally, the familiar term, liver"--to the time of the Italian professor Mondino dei Liucci, who performed the first "properly recorded dissection of a human corpse," then published his findings in the book, "Anathomia."

I do miss Anatomy classes, if only to see how Lennie Chua (neurology) would volunteer to wash all our instruments, how Joreb Cruz would not give up until he had successful dissected the bones of the ear, how Marvyn Chan and Ching Ching (IM) would argue--lovingly--over how a structure should be removed, and how Jegar Catindig (orthopedics) would often doze off in our table's edge. These, while the Catangui twins would argue against each another.

All medical students and practitioners will find this book useful and inspirational.