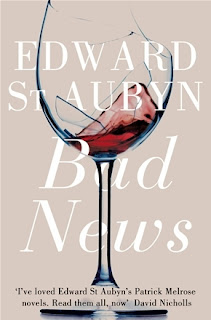 I TREATED myself to a novel yesterday—Edward St. Aubyn’s “Bad News,” the second of his Patrick Melrose novels, where the twenty-something Patrick, after learning about the death of his father whom he had despised, flies to New York City to claim the remains. In what reads like a blow-by-blow documentation of his descent into drug addiction, St. Aubyn paints the portrait of a rich man who has everything the world desires—money, sex, influence, women—but who remains empty despite these earthly possessions. We read of Patrick showing up to dinners high with concoctions of heroin, Quaalude, cocaine, and alcohol, which he took shots of inside washrooms, hotel rooms, and dark alleys. His hatred of his father burns him inside out.

Today's Sunday sermon couldn’t have been more timely. Pastor Bob spoke on John 5:1–16, “The Healing at the Pool on the Sabbath.” In this gospel account, the apostle John takes us to a place in Bethesda where a healing pool was. It was widely believed that when the angels would stir the water, the healing would take place. In the area were five roofed colonnades, shielding the blind, lame, and paralyzed from the sun and rain. I imagine this place to be a lot like the hospital where I train, where there is no shortage of illnesses, loneliness, and desperation.

In that place, Jesus heals an invalid for 38 years. From the account, this man doesn’t look like someone you’ll like: he seemed to have no friends, and everyone probably found him disagreeable. He was drowning, not merely in his chronic illness (the account suggests that it may have been due to his own doing), but in helplessness and, worse, indifference. But Jesus cared for him. “Jesus said to him, ‘Get up, take your bed, and walk.’” (John 5:8, ESV).

Jesus didn’t require much from the sick man. He simply ordered him to walk—and the man did. His life was changed from then on.

The world is full of the blind, lame, and paralyzed. Apart from Christ, all of us are weak, with no strength to help ourselves (Luke 5:31–32). We’re all blind, failing to realize that we are dead in trespasses and sins, and therefore cannot see the kingdom of God.

We are paralyzed because we do not have the spiritual strength to respond to God’s call.

But the dead must live—and this is the crowning display of God’s love for us, in what while we were dead in our sins, Christ has died for us. Satisfying God’s justice, Jesus gives us a new life that we live for and with him.

I wish that Patrick Melrose would get to know God’s free offer of salvation. Nothing would satisfy his restless soul until he’d come to terms with the gospel.

The novel, short but sobering, ends with Patrick Melrose flying back to London. We’ll see what happens then.
reading