August 16, 2013
IT'S NOT every day that I get to see my high school friends. Throughout the years some of us have migrated to Manila for study or work. But although we are in the same city, we live separate lives and only see each other when we go home for Christmas in Koronadal.

When Willie Loyola, who often flies here for monthly meetings, asked if I could make it to our mini-class reunion, I immediately said yes, even if it meant taking some hours off my precious post-duty sleeping time.

Friendships forged during one's high school days last a lifetime. My classmates saw me when I was barely pubertal. They had to deal with my hyper-competitive bent and forgave, even loved, me for it. But then again I had to deal with their teenage angsts and hormonal outbursts. And lest I incurred their rage, I granted their requests if I could ask the teachers to cancel our classes on a regular school day, when all we really did was hang out somewhere. That happened in Physics and especially in Economics, and we emerged ignorant of the laws of supply and demand by the time we had graduated.

Dinner tonight was at Conti's, Greenbelt 2. I had massive pork chops with saffron rice. Dessert was Mango Bravo, the house specialty, which I became a fan of. It was my friends' treat, of course. I was the only one "studying," after all.

Back row, from right: Greggy Granado and Christopher Sorongon. Front row, from right: myself, Vanessa Gumban, and Willie Loyola. Not in the photo were Charlen Suedad and Daniela Domingo, who were on their way from their bar review courses in Diliman.


Greggy, who's getting married next year and who's currently affiliated with an international shipping company, treated us to coffee and tea afterwards.

We joked around that we looked like Vanessa's bodyguards; she went to court this afternoon and was dressed like Jessica Pearson from the hit TV series, Suits.

Christopher, now an accountant for a major fast-food chain, was just as hilarious as he's always been. The Willie-Christopher tandem is a riot!

Charlen and Daniela came in late, but we were all glad to have them. Charlen now has curly hair, by the way. 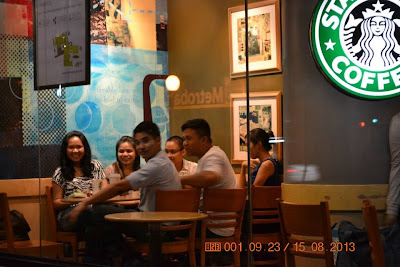 What joy to see them again! Umaasenso ang buhay! 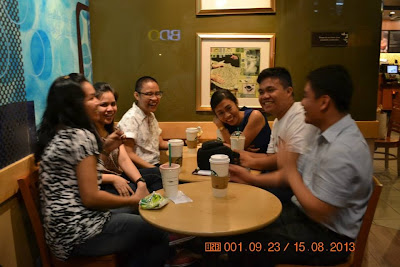